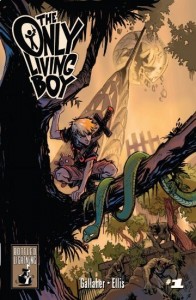 Lost, without his memory, in an unfamiliar world, Eric Farrell must piece together a new life for himself. Can he survive as the only living boy left in the world?
———-

“My life was over that day I ran away.”

With those words, twelve year old Eric Farrell starts his journey into a world that would’ve had Lewis Carroll shaking his head and asking, “Dude, what the hell?” We’re given no insight into what led up to Eric running away from home, and even he says that he has no memory of his old life. We do know that whatever it was, it left Eric feeling that there was no other choice, that he was being chased, and that running was all he had left.

On the run in the middle of a major storm, Eric takes shelter under an overhang in a park with nothing but a discarded teddy bear backpack and some empty beer cans to keep him company. It’s with this less than auspicious scene, with Eric talking to the teddy pack with the hope that they can keep each other company, that the young man’s story starts to turn.

Over the course of a couple panels, as we watch over Eric’s sleeping form, we see the world outside of his barely adequate shelter change. The first and most obvious immediate hint that things aren’t quite kosher is our first look at the hunched and lurking forms waiting for the sleeping boy. When he finally wakes up, Eric isn’t initially greeted by his visitors, but he is introduced to a world very different from the one he fell asleep in. What he’s faced with isn’t a park, but what looks very much like a tropical jungle. It’s then, with barely any time at all to process this information, that Eric gets his first look at the Alku… werebat looking creatures with no wings, but very bad intentions. And again, Eric’s running.

That seems to be a recurring theme in this story, at least in its first issue (four issues are currently available at ComiXology.com). Eric pretty much bounces from one dilemma to the next, still without much time to process what’s going on around him. At times he seems ready to try to take charge of his fate, like most twelve year old boys do, but still only manages to escape from one situation just in time to bounce face first into the next. Eric escapes from the Alku, only to find himself captured and caged by the obviously evil Doctor Once. Ya gotta feel for the kid, admire his moxy. Surrounded by “people” who are apparently mutated creatures of mixed origins, with Eric being the only apparent human left, the kid manages to keep himself from curling into a ball.

Interspersed among the problems in his path, Eric does manage to find a couple allies… At least, we hope they’re allies. Morgan, the fierce Mermidonian warrior, seems more interested in finding her next fight than in actually helping Eric. For that matter, the brutish Kleef has his own problems as the subject of Doctor Once’s experiments.
Finally, Her Royal Highness, Princess Thea, doesn’t have anything more positive for Eric than to offer him a wish for a quick and painless death. Princess Thea does provide some insight, telling Eric that regardless of where he’s from, or what his final fate might be, he is the only human in a world created and ruled over by the dragon Baalikar.

The narrative to Eric’s story is a pretty densely written one, with layers that aren’t all laid out at once. The world created by David Gallaher and Steve Ellis has a lot going on. Is it our world evolved? Is it a patchwork world created by the merging of parallel Earths? There aren’t any obvious answers to be found in this first installment, and that’s a good thing. I’m a fan of stories that let the readers learn as we go, earning what we discover along with poor displaced Eric. I look forward to finding out what else is out there, and what other challenges Eric gets himself dropped into… 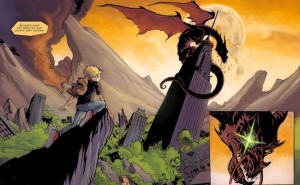 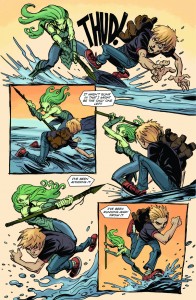 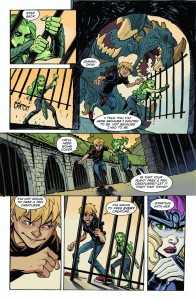