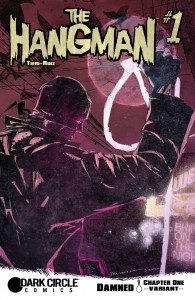 The Hangman #1 (available on ComiXology, from Dark Circle Comics)
Writer: Frank Tieri
Artist: Felix Ruiz
They say the Hangman is nothing more than an urban legend. A spook story told to scare criminals straight. But those who encounter him—like hitman “Mad Dog” Mike Minetta—know different. They know that when he comes for you… you’re dead already. Join fan-favorite writer Frank Tieri (WOLVERINE, BATMAN) and artist extraordinaire Felix Ruiz (WOLVERINE MAX, HALO) for an ongoing tale of horror, the supernatural and violence… and learn why some men may never be redeemed.
———-

Mike’s living the life of Joe Average. He’s got a nice house, a nice wife, an adorable little girl who takes karate classes after school. So of course, in a comic book called “Hangman” something bad has to happen, right? And oh boy, does it ever. Don’t worry, Mike’s fine. It’s Pete, the poor bastard in trussed up in the trunk of Mike’s car, that you need to be worried about.

Y’see, Mike’s an enforcer for local crime boss Johnny D, and Pete’s the guy who got caught sleeping with Johnny D’s wife.

Ouch. Turns out, Mike is a pretty evil sonovabitch, with a reputation for creativity when it comes to doling out the retribution. In Pete’s case, it involves a lot of strawberry jam and a bunch of rats. Pete’s got no regrets, though. In the midst of a beating of epic proportions, before he gets tossed to the rats, Pete professes his love for Mrs. D, and he points out that it’s Mike who should worry… Boia will be coming for him.

The Hangman. The killer of killers, the one who stands ready to balance the scales when real evil rears its head. Who is this “Hangman”, you ask? That’s the only question really worth asking. Is he an avenging angel, taking a stand on the side of Right in the battle between Good and Evil?

Sorry, if that’s the book you’re looking for, you’re gonna have to head over to one of the other titles out there… I won’t spoil anything by telling you who that is under the Hangman’s hood, but he sure as hell isn’t an angel.

But waitasec! Isn’t this an Archie comic? Y’know, I had that exact same thought as I read this book. I half expected that the Hangman was going to be making his base of operations down at the soda shop, and that he’d be sipping down vanilla malts when he wasn’t doling out justice. Holy crap, was I ever wrong! It seems that just as Archie and the gang have grown up and moved on to bigger and better things, Archie comics has gone the way of DC’s Vertigo titles. This is some seriously adult content here, folks. Take it seriously, and prepare yourself.

If you don’t, the Hangman just might take exception to your disrespect… you wouldn’t want that, would you?