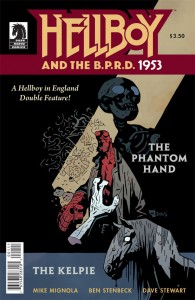 Hellboy’s first experiences with Bruttenholm in England involve the phantom hand of a murderer and a demonic water spirit in stories reminiscent of the early Mignola masterpiece “The Corpse.”
* Hellboy’s first ghost hunt!
———-

Fans of Mike Mignola’s original work in the Hellboy universe, rejoice! Not only do we have Hellboy’s penultimate (opinion: mine) creative team back together, like a buncha rockstars, but they’re giving us a story from the early days of Red and the Bureau for Paranormal Research and Defense. Longtime fans of Mignola’s dark and twisty world should enjoy taking a step back to a time when Hellboy wasn’t quite so… refined in his handling of paranormal events. New readers looking to explore new comic frontiers should find a great stepping on point, as this self-contained story serves as a good introduction to Hellboy and Professor Trevor Bruttenholm (aka: Professor “Broom”), working a case early in their careers.

The case is The Phantom Hand, and in tone and setting comes across like something that could have come from Edgar Allen Poe (he’s a writer kids… you should look him up). The hand in question haunts the grounds of manor in St. Albans, England. Working with private occult investigator Harry H. Middleton, an old friend of Prof. Broom’s, the reader is pulled into an old story of murder, retribution, and lingering evil (pronounced EEEE-vyl). The story unfolds quickly, as should be expected in a one-shot, and its resolution is abrupt. That might be a problem for a few people out there, but The Phantom Hand is the comic equivalent of a short story. More importantly, this book does a fine job of whetting the appetite for more Hellboy… which is kinda the point.

Now, stop listening to me yammer… you’ve got a couple days until this book’s release. Find something to do until then, and treat yourself to some Gothic style creepiness, courtesy of Mignola, Stewart, and Dark Horse Comics.