Dynamite Entertainment is proud to announce that beloved comic book heroines Red Sonja, Vampirella, and Dejah Thoris will undergo bold new directions and costume redesigns in new monthly series debuting in the first quarter of 2016. Following narrative direction from Gail Simone, the fan-favorite author of this past summer’s Swords of Sorrow crossover epic, the new titles promise unexpected storylines for its headlining characters, delivered by some of today’s most innovative creators. Red Sonja #1 will launch in January, helmed by writer Marguerite Bennett and artist Aneke. Dejah Thoris #1 and Vampirella #1 will debut in subsequent months, written by Frank J. Barbiere and Kate Leth respectively.

Gail Simone, whose critically acclaimed work on Red Sonja for the past two years inspired the massive company-wide celebration of female characters entitled Swords of Sorrow (featuring contributions by her hand-picked team of all-female writers), has created a road map for Red Sonja, Vampirella, and Dejah Thoris that will serve as the basis for all-new series with radically different settings and situations, fresh yet true to the traditional motivations of these comic book icons.

“We’re doing a monster makeover with these characters, and it’s a joy to be part of this. Make no mistake, these are characters we love, badasses all; the She-Devil with a Sword, the queen of all vampire hunters, and the warlord princess. Characters do not get any better than that,” says Simone. “Our mission here is to spruce up their look and remind people that these were the original female ass-kickers that inspired Xena, Buffy, and Leia Organa. They are the map others followed, and we get to bring them each a hot, new look from brilliant artist/designer Nicola Scott, as well as thrilling new mission statements for each of them.”

Artist Nicola Scott (Birds of Prey, Superman) designed the new look for these iconic characters, blending classic costume elements with the functional, action-ready designs that modern and diverse audiences long to see. “It’s an honor to reimagine these amazing, iconic women and be part of their ongoing legacy,” Scott says. 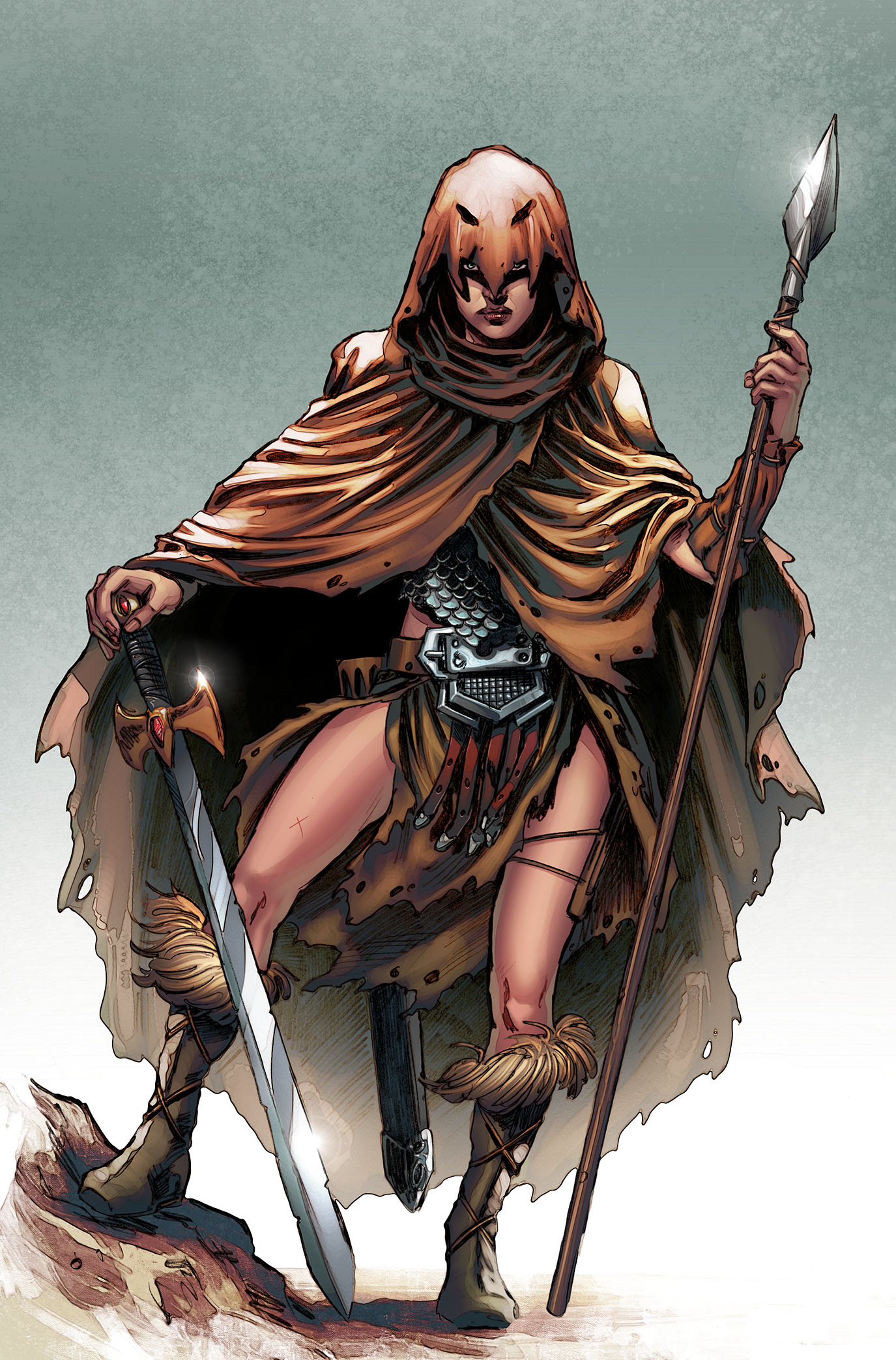 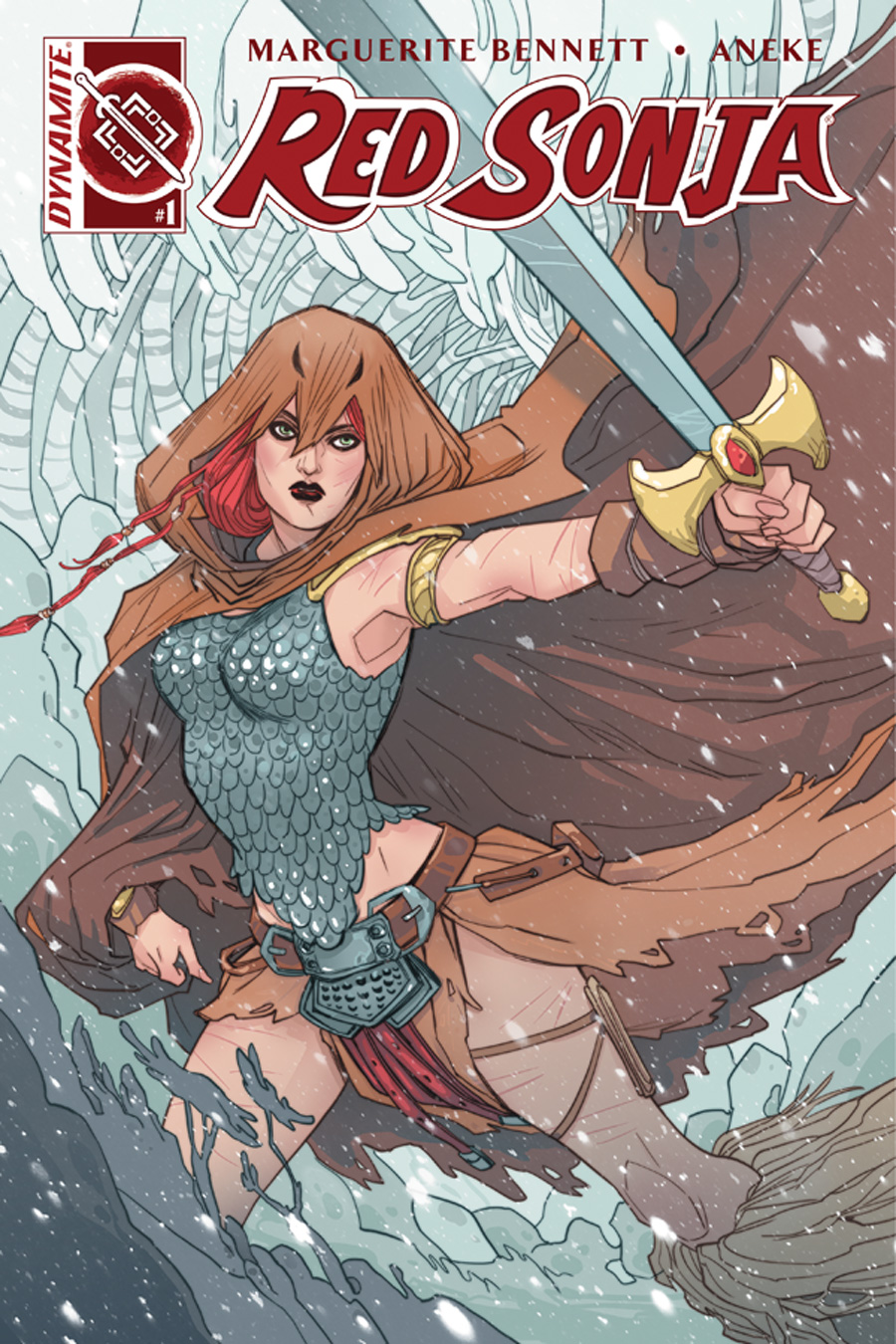 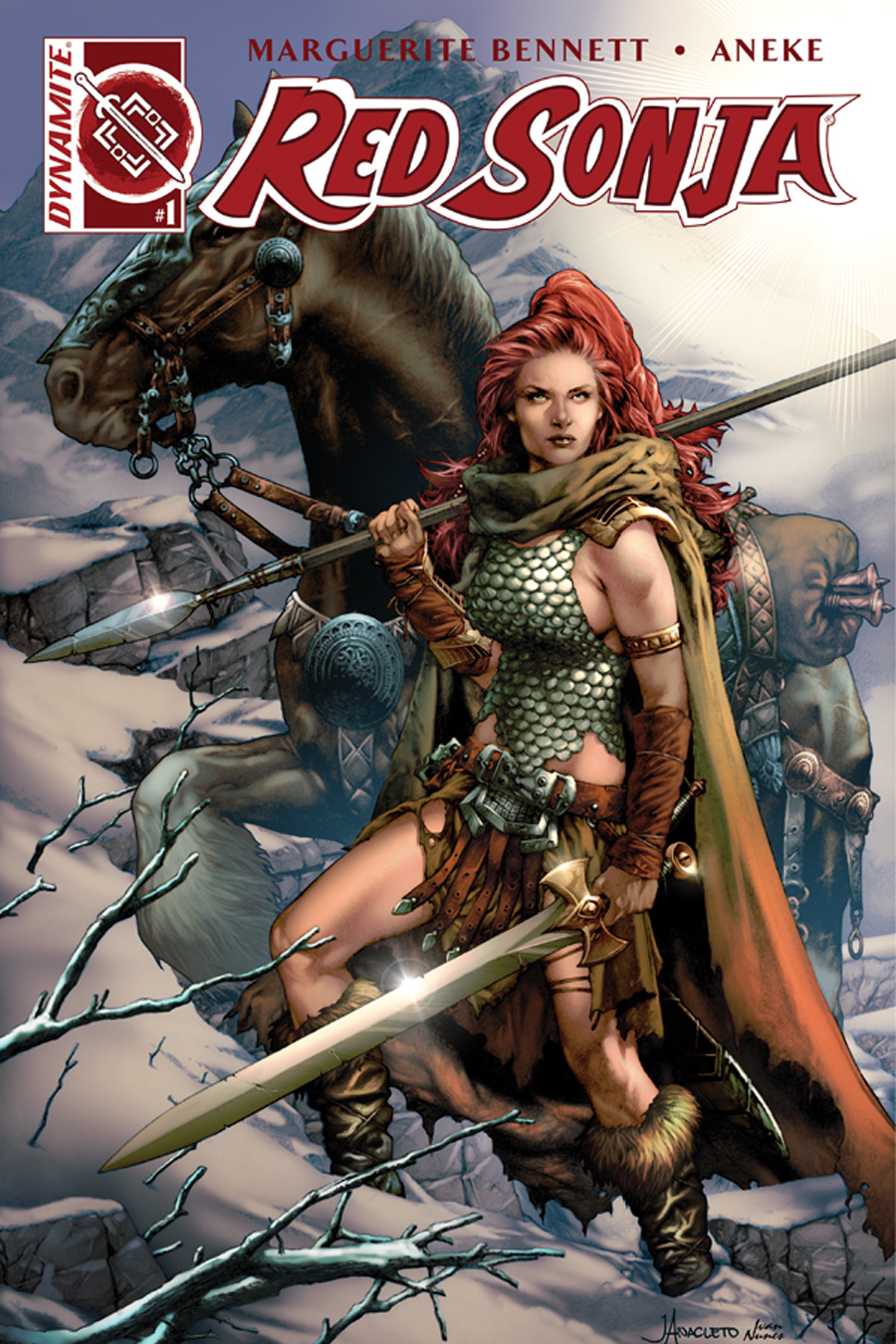 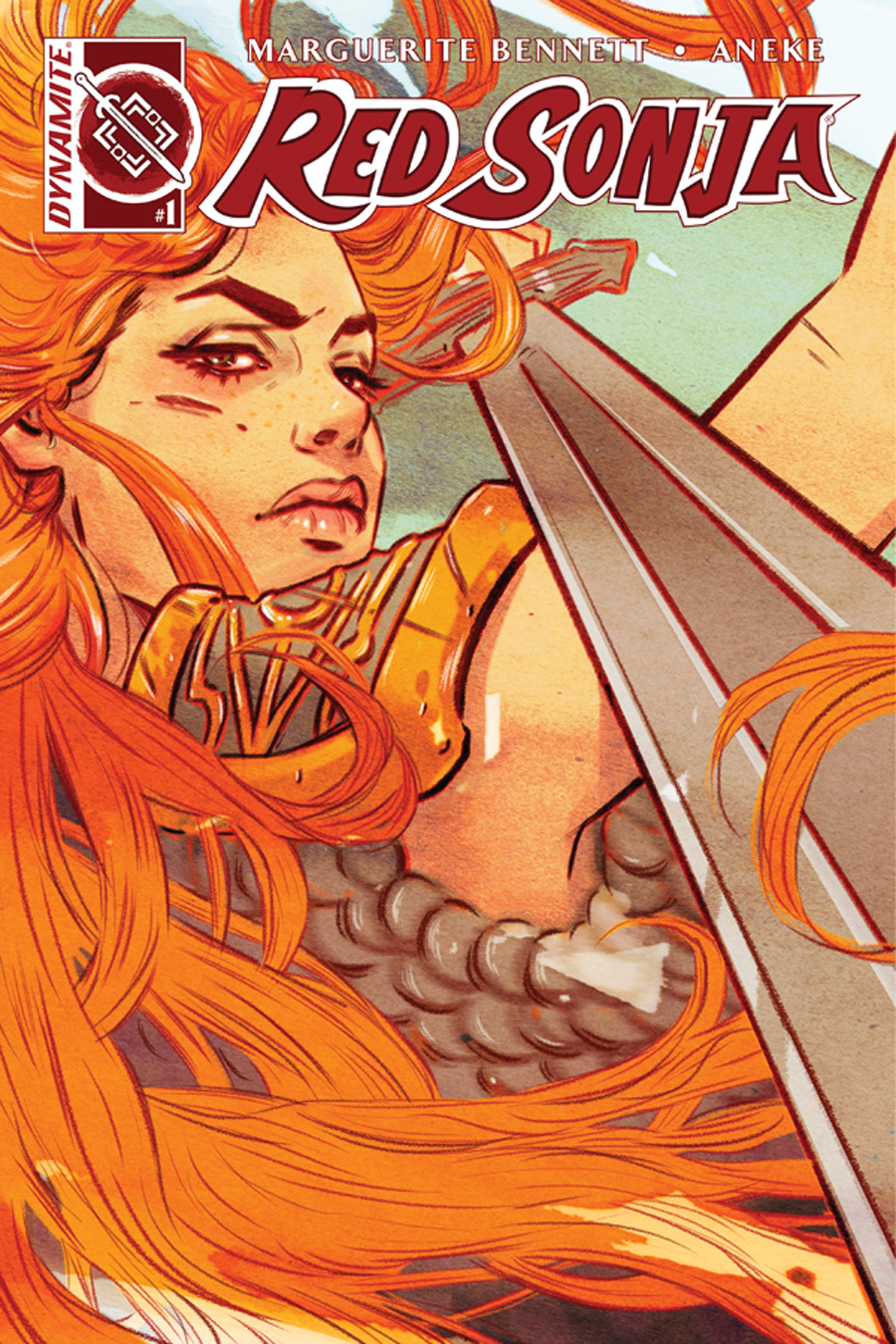 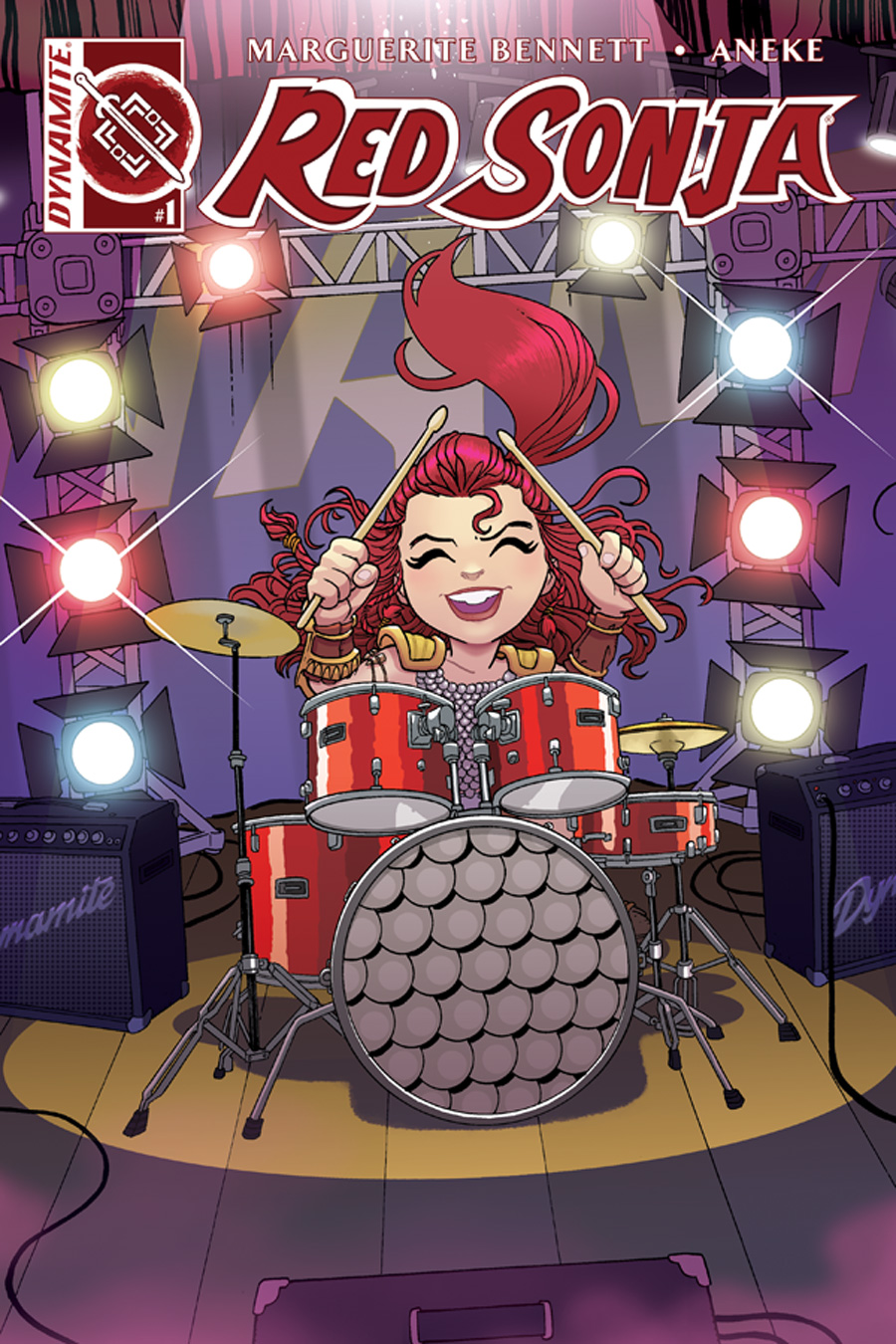 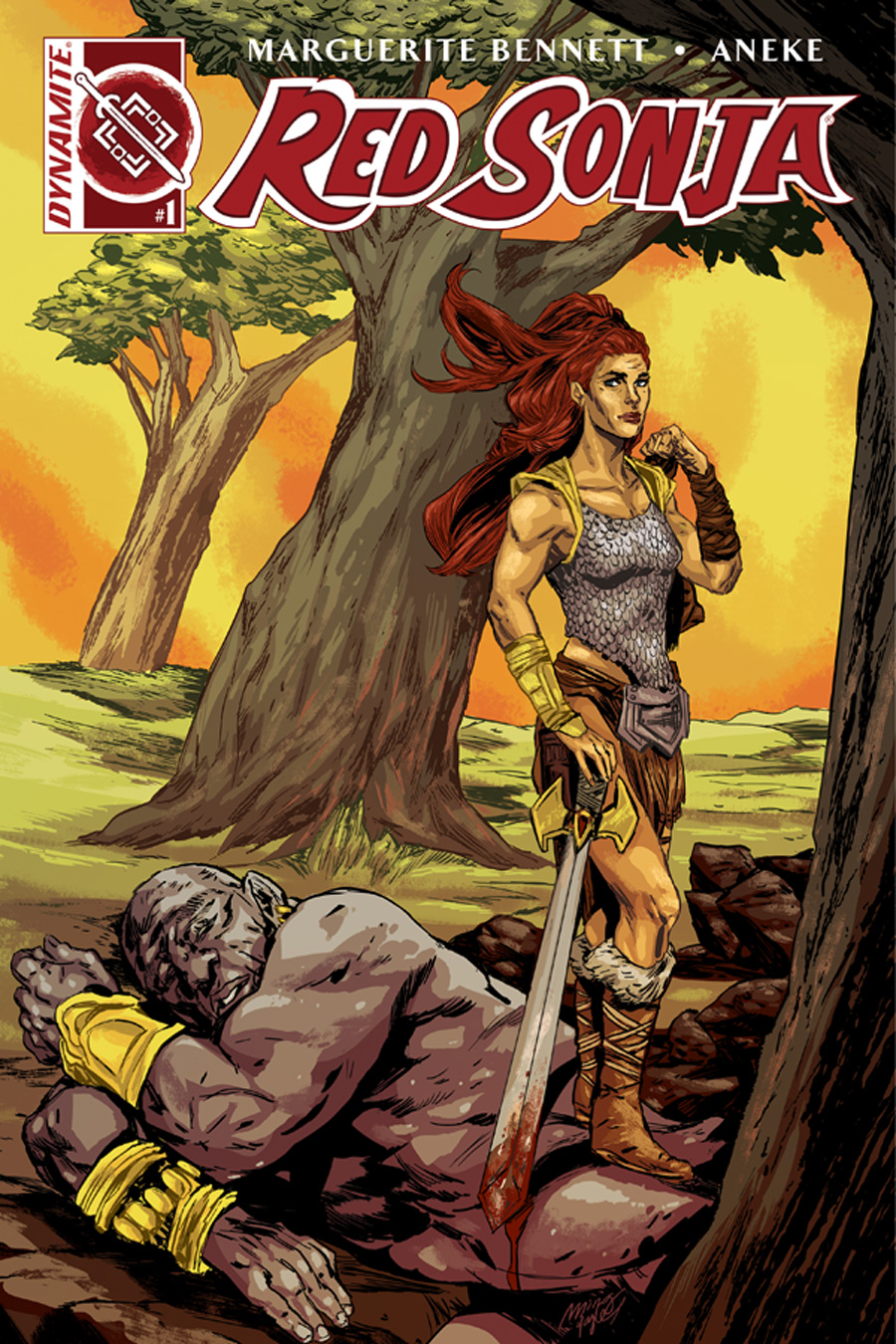 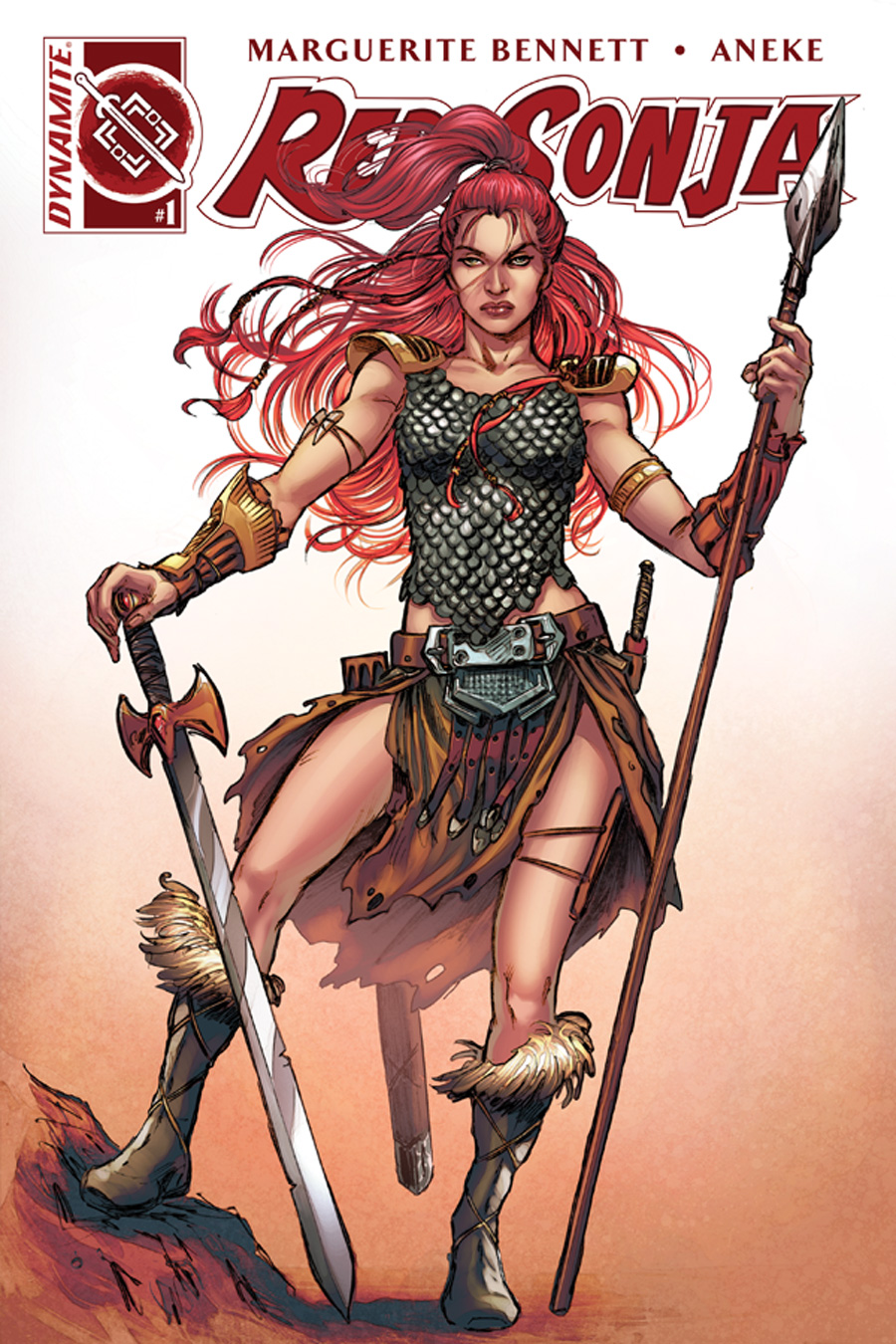 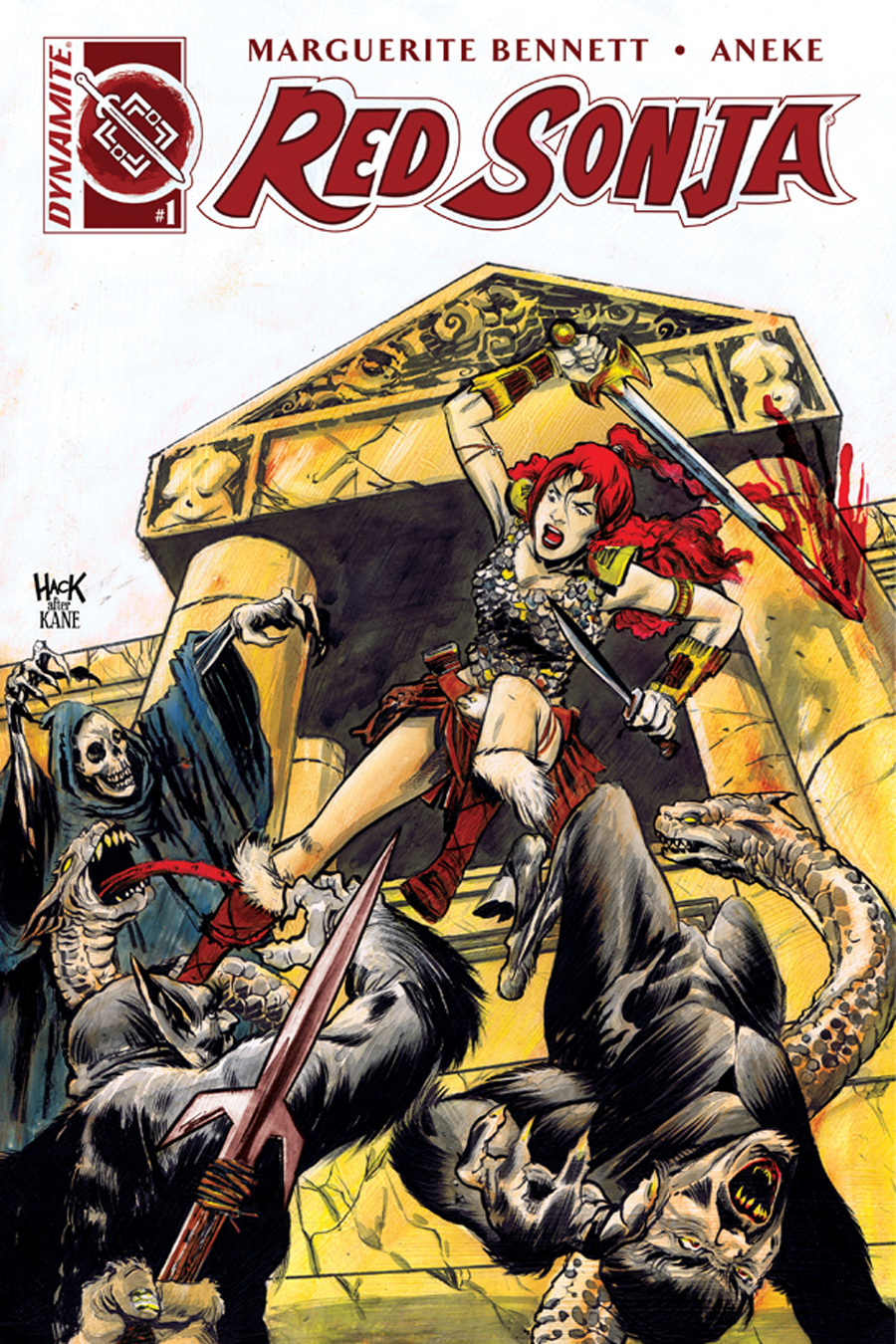 Red Sonja #1, by the creative team of Marguerite Bennett (Bombshells, A-Force, Angela) and Aneke (Legenderry: Red Sonja, Damsels) and scheduled for release on January 13, 2016, will see its titular heroine return to her homeland of Hyrkania, only to find it changed into an almost unrecognizable landscape. As envisioned by Gail Simone, the new series sends Sonja on a mission of infiltration, sabotage, and assassination when she discovers that her native people have been conscripted into the service of a Nazi-like regime.

“It’s an honor and a pleasure to be the new writer on a book as crazy and colorful as Red Sonja,” says Bennett. “While I’ve never yet had the pleasure of working with Aneke, our phenomenal new artist, I cannot wait for us to make the big, bloody, sexy, sweeping splash in a universe this rich with story, history, and the contributions of the creators and creatives who came before us. I am particularly indebted to Gail Simone, who has always been one of my idols in comics, who first suggested that I follow her run on the title and was endlessly guiding and encouraging as I broke into this new level of the medium.”

Regarding the direction of Red Sonja, the first issue will show that Red Sonja’s return home is necessitated when her king hovers at death’s door, while a dread new power rises from within Hyrkania’s own borders. The new authority is bent on defending its homeland – no matter the cost, no matter what its people become. Billed as a defining chapter in the Red Sonja saga, the opening “Falcon Throne” storyline is dark, clever, vicious, and at times even mirthful, as the She-Devil with a Sword must topple the brutal regime, her own people.

Bennett says, “This current arc allows me to explore elements of my favorite stories, which have always been those that are enormously morally gray. In this case, we’re nearly to ‘Red Sonja vs. The Iron Age Nazis’, as she watches her own people united and then profaned by a charismatic leader with intimate connections to Sonja’s own long-buried past. She is placed in an impossible crisis, on the run from the very people she has saved, torn between saving her homeland… or destroying it. I hope readers will enjoy something dark but fun, vicious but witty, balanced between battle, romance, intrigue, and good old-fashioned monster-slaying. I’m so grateful to have a chance to lead Sonja into this brave new world.”

“I was thrilled to draw Red Sonja from the beginning. She is one of my favorite characters ever, so when I was told that I would be drawing this magnificent warrior, I just couldn’t stand the excitement,” says Aneke, the illustrator of the new series and a self-proclaimed devotee of Frank Thorne, artist of Red Sonja‘s first-ever series. “I was expecting some powerful stuff from Marguerite Bennett, and I haven’t been disappointed! The strength and the misanthropic touch of the red-headed heroine have always spoken to me, so I feel really lucky to draw her.”

With the new series comes a character redesign by celebrated artist Nicola Scott, who describes her fresh take on Red Sonja: “Sonja was a collaboration between myself, Gail, Dynamite and the licensors. Her big red hair and chainmail are iconic, and I felt strongly they needed to carry the look but be modernized. Keeping her hair big but out of her face seemed practical, and the idea of the chainmail tank rather than bikini was a suitable update.”

Dynamite will celebrate the new Red Sonja #1 with a variety of cover options, including Cover A by Marguerite Sauvage (Bombshells); Cover B by Jay Anacleto (Legends of Red Sonja) which will interconnect with the Cover B editions of Dejah Thoris #1 and Vampirella #1; and Cover C by Tula Lotay (Swords of Sorrow). A special Subscription Edition (Cover D) features the “cute” artwork of Tony Fleecs, intended for consumers who place preorders with their local comic shops and interconnecting with the Subscription Edition variants of Dejah Thoris #1 and Vampirella #1. Robert Hack (Chilling Adventures of Sabrina) provides cover artwork for the Shared Retailer Exclusive, and a Blank Authentix cover variant is available, perfect for aspiring artists and convention commissions. Finally, Ming Doyle (New Avengers) provides a special incentive cover to encourage strong preorders from comic shop retailers, as does Nicola Scott with an image of her first redesign of the character.

Red Sonja, known also as “The She-Devil with a Sword,” is renowned as fantasy fiction’s most prominent female character, formerly a swashbuckling ally of the Robert E. Howard character, Conan. Her early adventures in the Marvel Feature comic book series led to a successful ongoing Red Sonja solo series, a celebrated run of comics from 1976 through 1979. Dynamite Entertainment acquired the Red Sonja license in 2005 as their second-ever published title, arriving on newsstands to critical acclaim and a very receptive audience. Dynamite has since published over one hundred Red Sonja comic books, including crossovers with popular characters including Conan, Dejah Thoris (of Warlord of Mars), Vampirella, Spider-Man, and more. 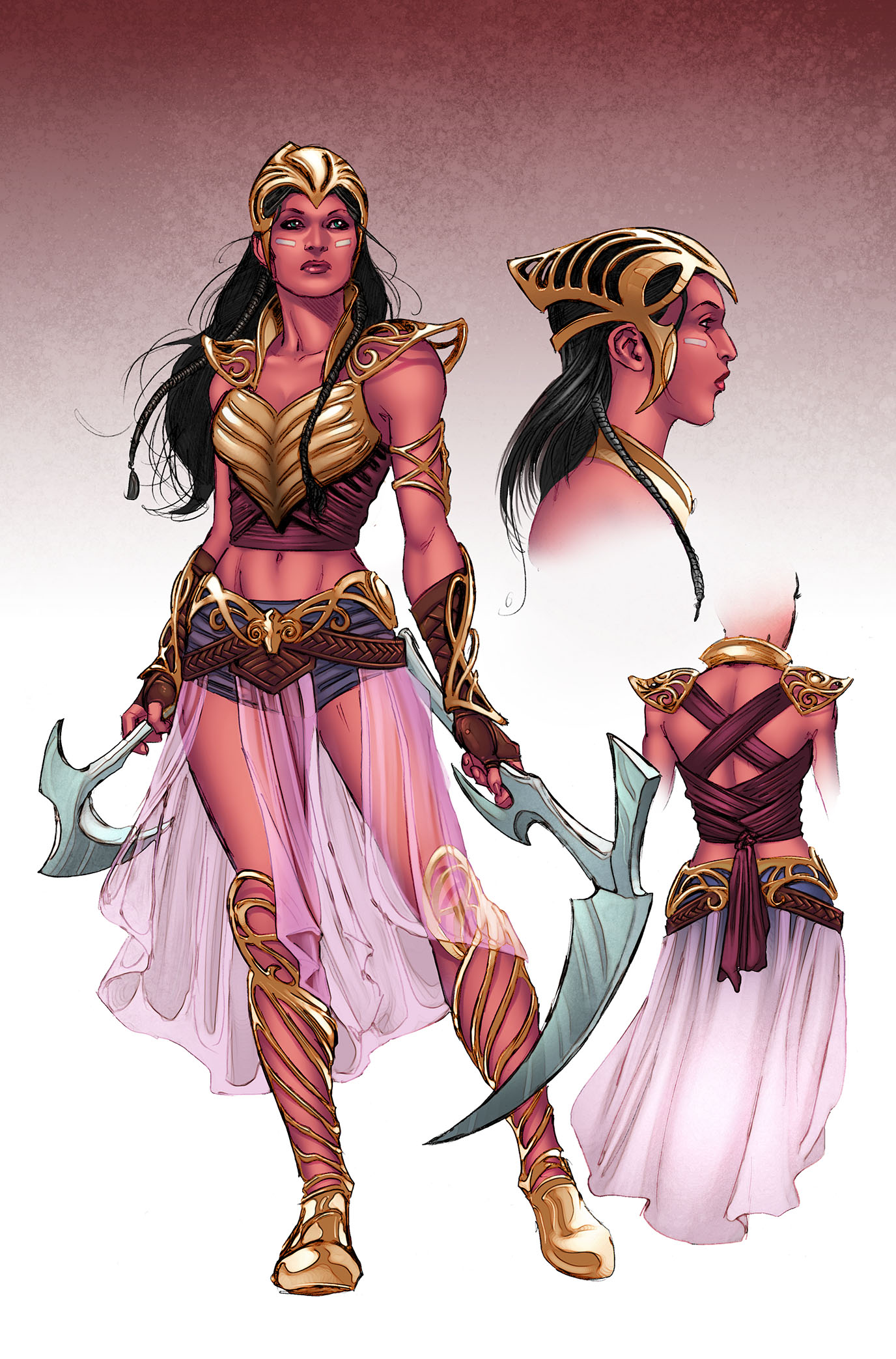 Dejah Thoris, a royal warrior who has served as a major supporting cast member of Dynamite’s various Warlord of Mars series as well as the star of several solo Dejah Thoris series, will appear in a new #1 issue this coming February, courtesy of writer Frank J. Barbiere (Avengers World, Solar: Man of the Atom). As described by Gail Simone, Dejah Thoris would present a fall from grace for the Martian princess, as she embarks on a self-imposed exile, assuming a new identity and enlisting as a rookie soldier on the farthest, deadliest borders of her Barsoomian civilization.

Barbiere says, “I am truly honored to be writing Dejah Thoris, a character with such a robust history and celebrated pulp pedigree. I’m a big fan of Edgar Rice Burroughs, and to be able to contribute to the canon of one of his most celebrated characters is really exciting. This is a new start for Dejah Thoris, and I think our story is going to reignite the spark of what makes her great. It’s a bold new take that really captures the spirit of Dejah as a dynamic, interesting, and capable character while exploring her past in a way that fans new and old won’t expect.”

“Dejah Thoris was about playing with themes and the Barsoom aesthetic,” says costume designer Nicola Scott. “Plaited leathers, swooping, organic shaped armour, and gossamer fabrics seemed the right place to start. It was just a matter of playing around with shapes and proportions until it came together.”

Dejah Thoris, a “Princess of Mars”, debuted as the eponymous heroine of Edgar Rice Burroughs’ original John Carter story (A Princess of Mars, dated 1912). While the love interest of the world-displaced Confederate soldier, the strong and talented royal never stood on the sidelines, often venturing into danger or battle — and thus serving as a template for later science fiction heroines such as Princess Leia of Star Wars and Neytiri of James Cameron’s Avatar. Since her debut in comic books in 2010, she has been an adventurous mainstay at the company. 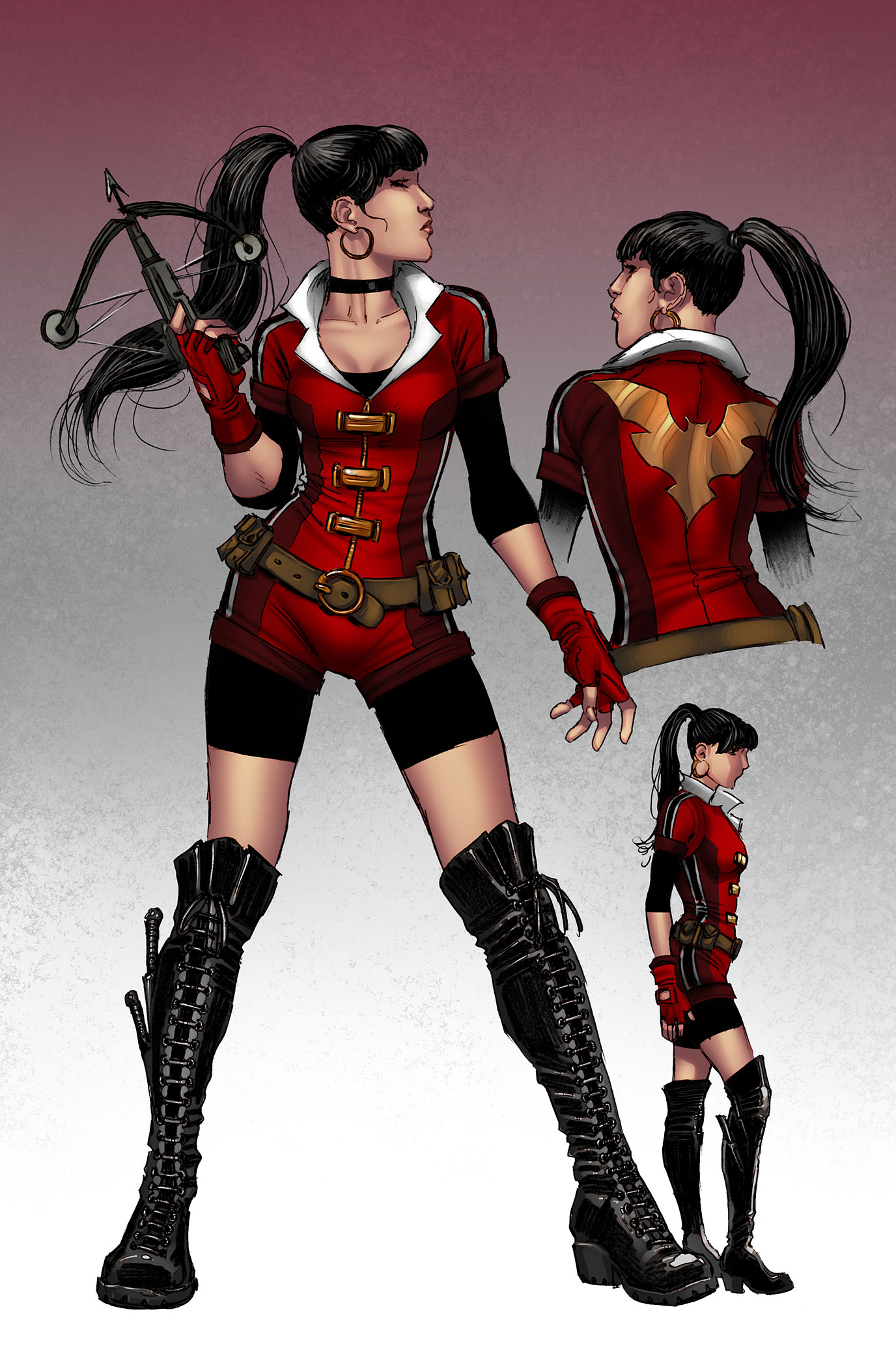 Vampirella #1, debuting in March 2016, will feature the writing talents of Kate Leth (Adventure Time, Bravest Warriors), and see a return to the character’s roots as a horror hostess, as her costumed identity goes public… while privately, she uses her new celebrity status to uncover the links between silver screen killers and a real conspiracy of monsters.

Kate Leth, writer of the new Vampirella, says, “Vampirella takes Hollywood! In this new and twisted take on the classic horror queen, Vampi moves to the City of Angels to find more than a few demons in the mix. Along with her paramour/werewolf Tristan and trusty butler Coleridge, she begins to investigate mysterious disappearances in the shadowy world of B-movies and the monsters who make them. All the while, she finds herself a sudden sensation after a video of her monster-hunting in her classic ensemble goes viral. Can Vampirella be both a cult icon on the rise and take down an empire of ghouls and ghosts? Signs point to: Hell yes!”

Regarding the redesign of one of comics’ most iconic costumes, Nicola Scott says, “Vampirella was a lot of fun. We could actually make her modern, with some retro influence. I liked the idea of keeping her in a one-piece but making it a leather jumpsuit with her logo embroidered on the back. Part biker, part roller-derby. I hope to see cosplayers in this one ASAP!”

Vampirella is a raven-haired heroine who remains, even after 45 years of publication, one of the comic industry’s leading ladies, due in no small part to Dynamite Entertainment’s stewardship of the character. Since Vampirella‘s very healthy resurgence in 2010, Dynamite has published two volumes of a monthly series, several miniseries and one-shot specials, and crossovers with multimedia brands and comic book peers. The Vampirella franchise is a haven for writers and artists with a penchant for the macabre.

Regarding the accessibility of the new Red Sonja, Dejah Thoris, and Vampirella series, Gail Simone says, “You don’t need to know their history, you just need to like awesome damn women doing awesome damn stuff. Come join us!”

“We’re beyond thrilled to be working with a host of talent on these iconic characters, with not only new imagery, but new directions and adventures as well,” says Joseph Rybandt, Senior Editor of Dynamite Entertainment.