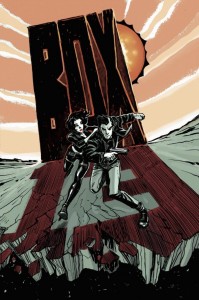 From ComiXology and Bottled Lightning, and the Harvey Award and Zuda winning creators of High Moon! Investigative author Dan Holiday has spent the last several years of his life researching the secrets behind the MKULTRA project. His latest book has brought him a degree of notoriety around the country and around the world. And, during his recent book tour, Dan discovers something that will change his life forever. Join him as he learns what lurks inside Box 13
———-

After reading High Moon and The Only Living Boy, taking a look at Gallaher and Ellis’s third project was kind of a no brainer. After burning through Box 13 (the collected edition, available on ComiXology), the only disappointment I found was that there wasn’t more to it. I don’t think it’s fair to say that Box 13 is my favorite story put out by this creative team, as each of their titles are as thematically different as they could possibly be, but I do think it’s their best production from a purely technical viewpoint.

In High Moon, Gallaher and Ellis brought us a dark and violent supernatural thriller based out of the Old West which fans of White Wolf’s World of Darkness roll playing games should appreciate. The Only Living Boy brings a bit of a fairy tale to the page, with flavors of Peter Pan and Alice in Wonderland in a layered story that carries some pretty dark underlying themes. Both are very enjoyable reads, which I would recommend whole heartedly. They might not be perfect works, but each in its own right is a solidly put together, original spin on an established genre, and it comes through that they are both labors of love.

I would just like to say that when Gallaher and Ellis turned their sights to the spy thriller, they knocked it out of the ballpark.

Digging into the CIA’s dirty laundry, Dan Holiday has worked to uncover everything he can about government sponsored brain washing and mind control programs, predominantly MKUltra. His research has revealed some pretty damning evidence showing the Agency’s experimentation on apes, and with the book that followed Dan finds the legitimacy as an author he’s been looking for. At an event celebrating the release of his investigative opus, Dan finds a box marked with a red number 1 on the top. A note attached to the box reads “To Dan… Love, Suzie”. Thinking the box is a gift left by an anonymous fan, Dan opens it and in a flash of red he takes his first step down the proverbial rabbit hole. Joined by Olivia, a fan of his spy novels and a woman remarkably well-suited to the chaos and danger that now follows him, Dan finds himself on the run. In the spirit of The Manchurian Candidate and The Bourne Identity, Box 13 is a fast read, broken into thirteen chapters. The action is quick, and believe me when I say that no detail is accidental or superfluous.

The writing is in my opinion David Gallaher’s best so far, carefully laid out and scripted so that the reader is able to discover the truth behind Dan Holiday’s troubles right alongside Dan himself. Steve Ellis’s artwork, predominantly presented here in black and white, reveals Dan’s trip from chapter to chapter in stark relief. The use of the single color red throughout the book gives hints and draws attention to the details that the reader might not even realize are details until later on.

This is a book that I’m happy to stand behind as a reader and reviewer. Get it. Read it. Love it. Just don’t go opening strange boxes from anyone named Suzie… bad things can happen. 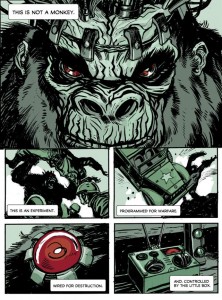 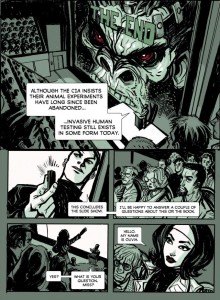 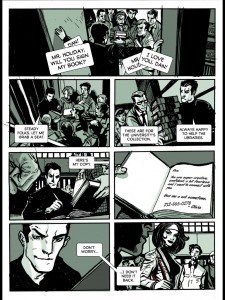 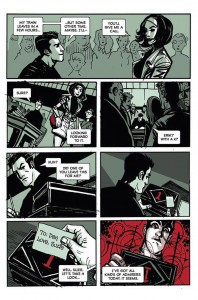