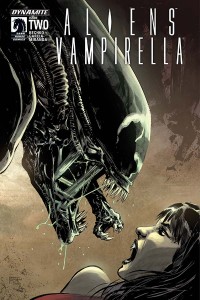 Cover: Gabriel Hardman
Writer: Corinna Bechko
Art: Javier Garcia-Miranda
ON SALE DATE: October 7
With the Xenomorphs awakened, the Martian base is in mortal danger. But can Vampirella win the trust of her human companions in time to launch a counter attack?
———-

Vampirella has been around for a pretty long time, dating all the way to her first appearance in Warren Publishing’s Vampirella #1 in 1969. Since her humble beginnings as the hostess of a black and white horror anthology magazine, she’s made a name for herself as one of the longest lasting heroines in comics history. In 2010, Dynamite Entertainment picked up the rights to the alien vampire queen, and she’s been on a holy tear ever since.

In this story line, Vampi’s been recruited to accompany a trip to a manned base on Mars, where the remains of an ancient race of vampiric aliens, much like Vampirella herself, has been found. The hope is that Vampi would be able to shed some light on the origin of these beings, and maybe more importantly to Vampirella herself, what caused them to vanish. As the title of the series oh so subtly hints, the humans aren’t the first come along since the first residents vacated the neighborhood.

As this second issue opens, we see that the Xenomorphs have made their presence known, and they’ve left a pile of bodies behind them. Can Vampirella recover from her wounds in time to head off a second attack from the alien menace? For that matter, can she and her single human ally convince the second wave of incoming earthlings that they need to get the hell off of Mars before the aliens can begin their migration (“Dust off, nuke ’em from orbit… only way to be sure.”)? Can the vampire vixen convince the counter-attacking humans that she wasn’t the one responsible for the bloodshed (come on, like she’d let all that food go to waste)? Finally, can she uncover the mystery of this other ancient race of alien vampires?

Buy the book, good reader… Find out for yourself. 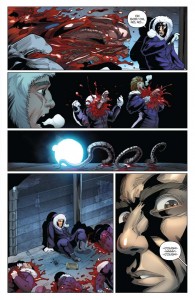 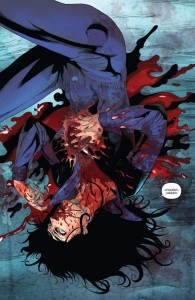 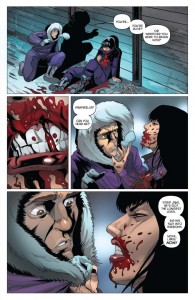