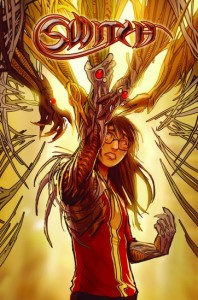 In SWITCH, a teenage girl must bear a mighty artifact that grants her immense powers… the catch? It’s a bit haunted!

Witchblade has been a fan favorite title for years… damn, maybe even decades? I remember when it started out back in 1995 (so yeah… decades), dropping Detective Sarah Pezinni roughly into the role of reluctant hero as she was chosen to be the newest bearer of the Witchblade. I watched the short lived television show, and shook my head in disgust when it was canceled because of the lead’s legal drama (real life, not on the show). Since then, I’ve drifted away from the comic, but I’ve seen it holding pretty steady, sometimes dropping into the background, but always coming back to the forefront as a popular title.

Now it looks like the series is finally coming to a close. Image is bringing Sarah’s story to a close, and letting her set the Witchblade aside after all this time. But…

The Witchblade, offspring of the Darkness and the Angelus, isn’t just a thing, and it isn’t going to be satisfied with sitting on a shelf somewhere. This is where Mary comes in. Over the centuries, starting with a brave and curious cavewoman named Una, the Witchblade has chosen a woman to be its bearer, someone exceptional, with the potential to lead or destroy nations. Someone who has to wear a hat to school because she has a zit of epic proportions smack in the middle of her forehead.

Okay, so Mary’s still in high school… Maybe she’s not what we’d call “exceptional” in the classic sense of the word and will never lead armies against unspeakable odds. She’s bookish and non-confrontational, with a wry sense of humor and an understated idea of her place in the world. Mary isn’t who you’d picture taking up one of the greatest relics ever known to beings both mortal and celestial. She’s who you’d picture reading the comic book about said celestial relic.

And Mary isn’t alone in this old-as-time tale of the battle between Light and Dark. As is typical of the works of Stepan Sejic, Switch is a book that looks like it will be well populated by interesting and unique individuals. The one most likely to create the biggest impact in Mary’s life will be her long time but currently estranged friend, Tony Estacado, son of Jackie Estacado and latest host of the Darkness. Yes, that very same Darkness which helped to spawn the Witchblade, passed down the Estacado line from one generation to the next, waiting to manifest in its host at the age of 21 for a lifetime of raising hate and discontent. What remains to be seen is how Tony will deal with his role as the embodiment of all things Dark and nasty.

As always, Sejic’s shining glory is his combination of artistic style and snappy dialogue. He embodies his characters with all the merits and flaws you’d find in living, breathing people. In every book I’ve read from him, there are very few cut and dried two dimensional “bad guys”. Everyone has their motivations, whether or not we’re privy to them from the start, and everyone embodies the adage, “Every sinner has a future, and every saint has a past.” Sejic’s artwork gives each character their own personality, creating more character depth through facial expressions than just about any other artist I’ve seen working today.

Switch looks like it’s off to a strong start, with several characters introduced and given enough time to pique the interest of a reader. Anyone who’s read any of the tied in titles (Witchblade, The Darkness, etc), anyone who likes to read fully realized characters, anyone who just wants to sit and look at the pretty pictures… Everyone should be able to look at Switch and find something worthwhile and engaging. 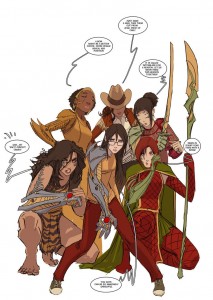 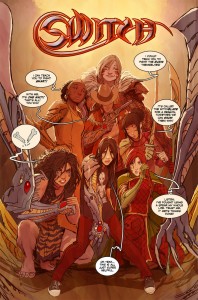 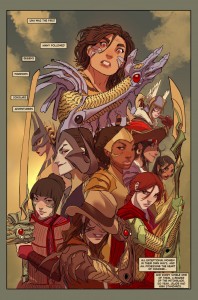