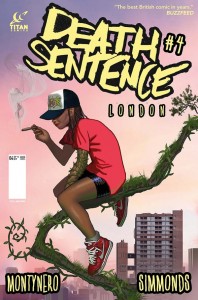 Death Sentence London #4
Written by Montynero (@Montynero)
Art by Martin Simmonds
The smash-hit sex, death, and superpowers series continues – now ongoing!
• London remains under curfew, as electrical storms wreak havoc on the city and bomb-damaged infrastructure and martial law leads to chaos and rioting on the streets!
• Verity comes into her own – kicking ass with weaponised creativity and G-plus-enhanced reflexes!
• At the Chronicle, reporter Peter Fincham begins to put the pieces together about the government’s involvement in the G-plus crisis – will Verity survive long enough to turn informant?
• And at the heart of the riot – a brand-new G-plus cover star: Roots!

Super powers as a sexually transmitted disease? If that sounds like the coolest thing ever, keep in mind that Death Sentence is a book grounded in the concept that “you don’t get something for nothing.” The price tag attached to “great power” gained through great irresponsibility is a terminal disease with a life expectancy of six months. That’s it. Ultimate high, cycling through to the final low. The other concept that keeps Death Sentence apart from other comic book titles are its ties to current headlines. Racial tensions. Fear and hatred toward police. Resentment of those in power. This isn’t a book to read for mindless entertainment, and it isn’t going to help you escape from events in the news. It’s raw, it’s brutal, and at times it wasn’t easy to read. If you’re at all put off by this paragraph, you might want to consider a different title. All that said, this book could very well be worth the effort and discomfort it might cause.

The themes covered in Death Sentence are about as realistic and topical as you can get in a comic book. The issue’s climax is dropped smack in the middle of a riot in response to a police shooting. As her neighborhood tears itself apart, rioters inexplicably setting fire to the shop where they buy their groceries, Root is slapped with the inevitable decision… Is she the die hard “looking out for number one” dog eat dog criminal she thinks she is? Will she be able to stand by and watch her neighborhood burn to the ground? Or is she going to step forward to lend a hand where it’s very much needed?

Death Sentence is pretty much an emotional roller coaster ride, regardless of your political or ethical leanings. The writing is sharp and to the point, with no emotional stone left unturned. Characters run the full spectrum, from very flawed FBI deep cover specialist Jeb Mulgrew, to up and coming drug dealer “Root”, who’s abilities allow her to grow the best weed in Brixton and use her plants to choke the life out of any threats to her business. There don’t seem to be very many two dimensional characters, everyone firmly rooted in varying shades of gray and wearing their flaws in the open for everyone to see.

The art brings this British-born comic to grungy life. The colors accentuate the attitude reflected in the panels, with each scene or setting sticking to a specific scheme of reds, greens, and stark white. Characters are drawn in a more realistic style, with no overly muscled physical specimens or superhero costumes to be found.

Not at all “light reading”, Death Sentence might be the thing for you if you’re looking for a comic book reflection of current events and political climate. It’s not always an enjoyable read, but in its darker moments it is going to be a book that can make you think and consider where you might fall when the proverbial chips are down.