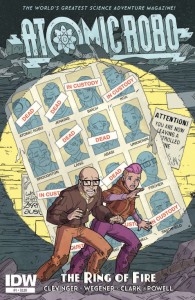 Atomic Robo disappeared two years ago when Tesladyne was invaded by Majestic 12 and transformed into ULTRA, a task force leveraging the U.S. surveillance and military industries against scientific pursuits deemed to be hazardous.

Now the few remaining Action Scientists finally have a plan to find Robo, but they’ve got to dive deep into ULTRA territory to do it.

Meanwhile, giant monsters from the sea might destroy all of civilization.
———-

A while back, I discovered Atomic Robo, totally by accident, and I’ve been a big fan ever since. The writing is smooth and humorous, the dialogue sharply written with each character having a distinctive “voice”, and the art manages to give up just enough detail while still being what you’d call “stylized”. Basically, Atomic Robo is a sentient robot created by Nicolai Tesla. He’s lived through the decades following, and been a part of most major discoveries. He’s fought in wars, he’s explored Mars, and his arch nemesis is a relatively intelligent velociraptor named “Dr. Dinosaur” (okay, maybe he’s really not an “arch” nemesis… more of moderately dangerous nuisance). 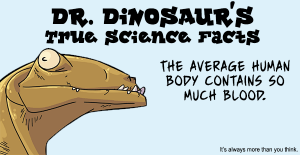 And here we are now… Robo is missing and presumed “dead” (robot, remember), and the Action Scientists of Tesladyne have been scattered to the winds. With a looming threat on the horizon (because isn’t there always a looming threat on the horizon?), Robo’s allies are looking to “get the band back together”, and they need Robo back to do the “action science” thing… seriously, it’s a thing. But having been completely and totally obliterated in a gi-hugic explosion from which there could be no escape, how can Robo be expected to lead the charge? There can be only one answer.

If you enjoy light-hearted action driven by intelligent writing and likable characters, you could really do a lot worse than checking out Atomic Robo. Read ‘em all. I have. Often. 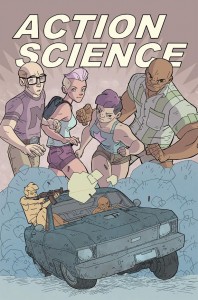