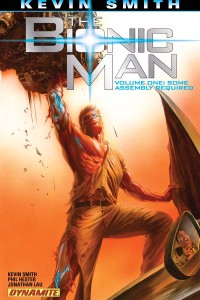 The Bionic Man TPB, volume 1: “Some Assembly Required”(Dynamite Entertainment)
Cover: Alex Ross
Writer: Kevin Smith
Artists: Jonathan Lau
Colorist: Ivan Nunes
Publication Date: Jul 2012
Format: soft cover trade paperback
Page Count: 248+ pages
We Can Rebuild Him! Steve Austin is back and acclaimed filmmaker Kevin Smith unleashes his high-octane vision in this new series from Dynamite. Smith unleashes The Bionic Man into the 21st century as only he can, with an innovative take on this classic character that will show you The Bionic Man with a whole new set of powers and abilities – not to mention enemies! Kevin Smith is joined by Phil Hester, artist Jonathan Lau, and cover artist/character designer Alex Ross (the team that brought you the new Green Hornet series).
This trade paperback collects the ENTIRE critically acclaimed 10-issue story, along with a complete cover gallery.
——–

Steve Austin, a man barely alive. Gentlemen, we can rebuild him.

Once again, I’m behind the times and playing catch up… In my defense, that is why they produce trade paperbacks, right? And for anyone who’s a fan of old action TV shows and/or Kevin Smith, this one is totally worth the price tag. I’ve seen a couple other attempts at the iconic characters that I grew up with, and as often as not I’ve been disappointed. From here on out, I will never doubt Kevin Smith or Dynamite again. As of this series, they’re two for two (they rocked it with Kevin Smith’s Green Hornet series… the movie that SHOULD have been), and they have my gratitude.

I read this book with an eye toward the details that I remembered most from the television show… I would like to go on the record as saying that everything I could have hoped for in a comic series is right here, lovingly re-imagined and recreated for a new generation. Am I overstating it? Maybe, but with the name recognition that Kevin Smith brings to everything he touches, along with his unrestrained fanboy flair when dealing with the classics, the old titles can get the kickstart that they need to find new fans. The writing team adeptly avoided every cheesy and contrived piece of corn that could have totally derailed the story, while giving a “wink and a nod” to the source.

Okay, story… Steve Austin is a test pilot. He’s got attitude. He’s got moxy. He’s the walking and talking unrepentant embodiment of all things male. On the last test flight for a prototype bomber, the worst case happens. Somehow he survives the crash, but he’s a mangled mess… “barely alive”. His friend, Oscar Goldman, makes a tough choice, and signs off on an off the books program that can save Steve’s life and change it forever. His damaged limbs are replaced with state of the art bionics, his skeletal and muscle structure reinforced to handle his new specs. In short, Steve Austin is made “better than he was before… better, stronger, faster.” But Steve’s not the first bionic man… And the first bionic man is pissed.

There are plenty of nods and inside jokes here for the old fans… The writing is snappy and sharp, and the artwork is dynamic. Overall, I really couldn’t find any fault in this book. I’m willing to allow that part of that could be due to my own fanboy nature and a deep regard for the source material (Hey, did you know that the television series was taken from a book written by Piers Anthony titled “Cyborg”?), but that doesn’t change the fact that I enjoyed the hell out of this book. I’m looking forward to enjoying the hell out of the rest of the series.