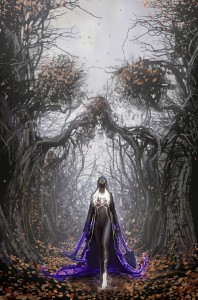 FIRST VOLUME FINALE! This is it. The Enemy has breached the gates, and Bernardette stands as the last line of defense. This is where it all ends, one way or another, and with this issue DEATH VIGIL ends. Or does it?
———-

Stjepan Sejic has got so much talent, it makes me sad way down deep in my cockles that his work isn’t the getting the widespread recognition it deserves. No even taking his art into account… and how can you look at that by itself, take it in, and not be impressed by something special… his stories and ideas have impressed the hell out of me as a comic reader. To the best of my knowledge, Death Vigil is his third wholly original work, the other two being the epic fantasy Ravine (graphic novels which didn’t make it past the cliffhanger at the end of volume 2), and Sunstone (which thankfully seems to be doing very well).

The 8th and final issue of this story arc, Sejic wraps up the battle to end all battles as the Death Vigil faces an opponent unlike any other. Is it a megalomaniac bent on world domination? An intergalactic despot determined to unmake the universe? Perhaps a trans-dimensional traveler seeking to bring the multiverse crashing together into one amalgam of chaos? No. The members of the Vigil are going up against Maria, a mother who in her grief over a dead child, is willing to make a deal with the Primordial Enemy to get her back. Personally, I can’t think of any other antagonist that could possibly be more committed to achieving her goals. To win out, the Vigil will have to think outside of the box… Usually, when faced with a beastie they can’t overpower, all they’ve ever needed to do was call on Bernie (that’s short for Bernadette… the Grim Reaper herself). Unfortunately, Bernie has been stripped of her scythe and her power, and is currently the captive of the Primordial’s offspring.

Edit: I’ve omitted an incorrect statement on my part regarding the editing for this issue… I didn’t know that this was a wholly unedited copy of the issue until I was told by Mr. Sejic himself. Completely chagrined, I wanted to make sure that my unedited mistake was taken care of. Try the crow, it’s delicious.

This final issue (man, I really hope not) moves fast and furious, barreling to a climax that has every bit of build up and tension from the previous seven issues. Sejic has signed on as a full time artist with Top Cow, and I’m hoping that the deal can breath some new life into his original work, that he’s not just bound to doing the art on other peoples’ stories. The guy’s got a lot of talent in all aspects of the business, and with a little bit of polish could establish himself in the pantheon of comic book creators, not just the guy who makes the comics look good, but the guy who makes all around good comics.