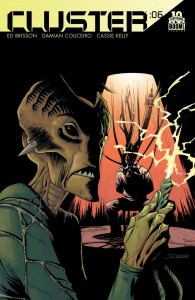 Cluster #06 (Damian Couceiro Cover)
Writer(s): Ed Brisson
Artist(s): Damian Couceiro
Samara and the other rebels attempt to take over the prison, but they have a new bounty hunter on their trail who’s being paid to find Samara at any cost.
———-

Samara Simmons’s life is a train wreck. Growing up a spoiled little rich girl, she had the life that some people would kill for. And then she killed for it, in a drunken car crash… her younger sister, no less. That’s some bad karma there, and she carries it heavily. In every mirror, the reflection of every window she passes, every time she closes her eyes, her sister’s accusing stare is waiting.

As if her life wasn’t complicated enough, Samara received a life sentence for her crime. The good news is that Global Outreach Enterprises has such a deal… Fight for them in their “volunteer” army, on a distant planet against an alien enemy, and a life sentence can be over in fifteen years. Sounds great, right? I mean, it’s all pretty cut and dried. This totally benevolent, completely straight forward and honest mega-corporation has to be on the up and up. Don’t they?

And this is where the story starts getting interesting. Samara and her squad meet up with resistance leader Lustig, formerly an inmate/soldier, just like them, fighting against G.O.E. on behalf of the indigenous races of the planet who just want to defend their homes against an invading force. Lustig’s been fighting the good fight, striking here and there to slow down G.O.E.’s terraforming operations, but he’s ice skating uphill and he knows it. His hope is that Samara’s father, a powerful senator back on Earth, can be convinced of G.O.E.’s less than honorable operations.

Cluster does a great job of blending a couple different elements together… We’ve got the old school kick assery of comics like Alien Legion. There’s the “everyone fights, no one quits” attitude of Starship Troopers. And it’s all wrapped into the warm and inviting blanket of “Trust us, we’re corporate executives” of Robocop (the original, not the remake). The action is fast paced and often brutal, and there are very realistic consequences for the characters when things don’t go their way.

We who are about to read (this book series)… salute!