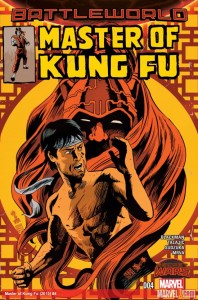 To be honest, I haven’t really followed many of the Battleworld titles. I’ve tried a few of them, but for the most part they just didn’t catch and hold my attention. Maybe I’m out of touch with the Marvel books. Maybe I’m turning into a crotchety old man who doesn’t like change. Maybe I was holding it all back, waiting for that one book to take a step forward out of the group. Maybe I think too much…

The Master of Kung Fu did what the other Battleworld books didn’t. It had me wrapped up in the imagery, the dialogue, the artwork, and through the four issues the only comparison I’ve been able to come up with has been “Black Belt Theater”.

When I was a kid, every Friday night was spent in front of the television, messing with the rabbit ears (ask your parents, kids) to tune in the Kung Fu movie of the week. Most of them were pretty much the same basic plot… ne’er-do-well shows up to learn Kung Fu, he’s the brunt of a few jokes but the school’s Master sees promise, bad guy shows up and kills Master, ne’er-do-well tries to get revenge and gets his ass handed to him, ne’er-do-well finds a new Master to teach him some unbeatable style of Kung Fu, ne’er-do-well meets bad guy again and defeats him in an epic showdown. But for all of that, these movies were gold. They were something that none of us had seen before, full to the brim of martial arts mayhem. It was glorious.

Now, I want to point out again that I haven’t really been following the Battleworld storyline… I know that the latest Secret Wars destroyed the earths of two realities, the mainstream Marvel Universe, and the “Marvel Ultimate” Universe. I know that the two realities were combined by the current holder of the Beyonder’s power, Dr. Doom, and that he’d cobbled everything together into a patchwork world under his all-powerful gaze. Characters who were dead are back (yeah, like that never happens…), and everything’s sort of mixed together in new and interesting ways.

So here we are, following the current adventures of Shang Chi, the Master of Kung Fu, as he takes on the challenge of the “13 Chambers of K’un Lun” in a bid to overthrow his evil father the Emperor. Fighting his way through the mystical Chambers, Shang Chi clashes with the many Masters of K’un Lun in a bid to make it to the final chamber where he will challenge his father. The winner inherits the title and powers of the Emperor of K’un Lun, and the Master of Kung Fu!

I’m telling you, the Shaw Brothers couldn’t have come up with anything better…