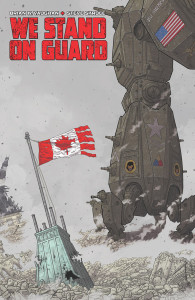 We Stand on Guard #1 (Image)
Story By: Brian K. Vaughan
Art By: Steve Skroce
Cover By: Steve Skroce
SAGA writer BRIAN K. VAUGHAN teams with artistic legend and MATRIX storyboard artist STEVE SKROCE for an action-packed military thriller that will have everyone talking. 100 years from now, a heroic band of Canadian civilians must defend their homeland from invasion…by the United States of America! The hyper-detailed combat between badass freedom fighters and giant f***ing robots begins with a spectacular 40-PAGE FIRST ISSUE for the regular price of just $2.99!
———-

(Note: almost published this review on July 4th, but it just seemed… wrong)

Before I get too far along here, I want to make something clear to anyone who actually reads these reviews, that this is a work of hypothetical fiction. Think Red Dawn, only in Canada, and instead of Russians or Koreans… it’s us (the U.S.). In no way, shape, or form do I believe that this story is intended to fuel the hate fires and to prompt any hostilities against our friendly neighbors to the north, and neither should anyone else. It’s a story, and all things being equal, it’s a story that’s starting out very well told.

Our story starts out in 2112 Ottawa, Ontario, with a very young Amber and her family watching a news report. The White House has been leveled, and everyone holds their breath as they wait for someone to claim responsibility. As Amber’s parents and older brother discuss who they think might have been the culprit, even suggesting that it might have been the Canadian government itself, the television turns to static. Amber’s father looks out the window and is struck by the sight of missiles falling onto his city. Apparently, America has decided who they’re going to blame, and it’s a lot closer to home than anyone in the Middle East. Amber and her brother are left alone in what’s left of Ottawa, their father’s dying words urging them to stay together and to take care of each other.

Jump ahead twelve years, the Northwest Territories. Amber is older, alone, and hunting to survive. As she’s about to down her next meal, she’s attacked by what looks like a mechanical wolf, a drone claiming that she’s in an unauthorized area and ordering her to identify herself. Choosing resistance over compliance, Amber attacks. It’s hardly a fight at all, and things aren’t looking good for the young Canadian… until the intervention of a group of Canadian freedom fighters, the “2-4” come along and save the day.

Now there could very well be some out there sputtering in angry disbelief and protesting the outrageousness of a story that features the kind of cold American aggression we’re introduced to. To those people I say, “Calm down, enjoy a refreshing beverage, and remember that you’re reading a comic book.” The best fiction is guaranteed to offend somebody, and reflects our hopes and fears in a setting of made up circumstances. Is Canada likely to blow up the White House? Is the United States likely to launch a disturbingly immediate and thorough missile barrage in response? Not so much. So let’s just sit back and take this story on its merits.

As I’ve already pointed out, a well written story is supposed to open up possibilities we might not have ever considered. It’s supposed to point us in new directions, often through the use of tragic events, and get us wondering how something like this could happen and what can we do to make sure it doesn’t… Through the use of well used archetypes, I think Brian Vaughan has gotten us off to a good start in that regard. We’ve got all of the elements we need, up to and including the war torn orphans lost in a desolate landscape. This is the first issue, and there was a lot of ground to cover, so we’ll see if they can build on this promising start.

Personally, I think the artwork Steve Skroce is where “We Stand On Guard” really shines. Character designs are distinctive, backgrounds are detailed, and the action moves us across the page very well. Through the use of expressions, characters don’t really have to say much to get a point across. The story progresses very nicely, even in the absence of text or dialogue to spoon feed us information.

In combination, the writing and the art lay out a pretty chilling new world, and personally I need to dig deeper into it all. I’m finding that I’m not so worried about what happens next, because I’m pretty sure that’s going to happen with or without me. What I really want to know is what set it all into motion? And maybe it’s a little bit of my own “Apple Pie” attitude showing through, but I’m kinda keeping my fingers crossed that it’s a conspiracy… There are enough people out there angry at the U.S. We don’t need to add Canada to that list. 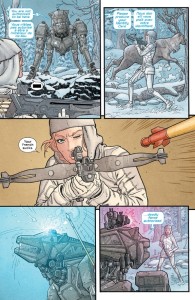 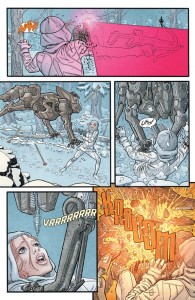 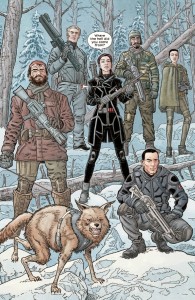