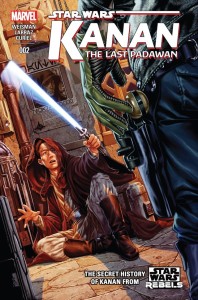 Fans of Star Wars, it’s a great time… Oh, I know there are going to be some of your curmudgeons out there having a cow over the treatment of the “Expanded Universe”. You’re determined to hold onto the many years’ worth of continuity, covering a multitude of books, comics, & video games. You’ve got it in your head that those memories, those stories that held together the Star Wars universe all through the Dark Times (yeah, I’m talking about episodes 1, 2, & 3…) when the credo that kept you going was “even bad Star Wars is better than no Star Wars”.

I know that you’re thinking all of this, because up until a very short while ago, those were my thoughts, exactly and to the proverbial tee. Let’s face it, Star Wars fans have had a rough go of it over the years. We lived with the fact that after Return of the Jedi, we weren’t likely to get another trip to the galaxy far, far away. And then Kevin Anderson brought us the Thrawn Trilogy… our first step back into the lives of the characters we loved.

And then Lucas sold it all to Disney. We were nervous, but cautiously optimistic. Now we had a chance to see our stories brought to life on the screen, all of those books we’d read given form in glorious 3D. We started to imagine what the Yhuzan Vong war would look like on the UltraScreen.

And then Disney wiped the slate clean.

But then, after we had a chance to grieve, after we worked through the stages, after we ran out into the night, braved the fury of the storm, and vented our rage to the heavens… Okay, that didn’t happen, but c’mon, you know you were pissed… Where was I? Okay, so once we’d settled down and gotten off of our fanboy high horses, we started to read the blogs and realized that wiping the slate meant that creative minds could open up new avenues and compose new stories without worrying about the tangle of continuity. We didn’t lose the stories we loved, and now we can look forward to brand new tales that were begging to be told.

Anyone watching Star Wars Rebels on Disney XD has come to realize that this is some pretty good stuff… There might’ve been a rocky start in the first season, but once they got rolling, the ragtag crew of the Ghost got their legs under them and took off. Front and center on the show is young Ezra, an orphan living by his wits under the thumb of the Empire. He’s taken in by the Ghost and her crew: ace pilot Hera, Lasan warrior Zeb, Mandalorian weapons expert Sabine, droid with an attitude Chopper, and Jedi Knight in hiding Kanan.

Which (almost) brings us to the comic I actually sat down to review. This isn’t the story of Kanan… This is the story of Caleb Dume, the young padawan who would grow up to become a Knight named Kanan. Until then, he’s got a long road to walk. The first issue of the series introduced us to Caleb and his teacher, Jedi Master Depa Billaba, on their mission to the planet Kaller. It’s during the peak of the Clone Wars, and Kaller is currently held by the Seperatists. By the end of issue one, Master Billaba and her ward Caleb have successfully chased the bad guys away, liberating Kaller from their oppressive presence. Time to celebrate? Not so much… the last panel on the last page of the issue has the Clone trooper Captain assigned to assist Master Billaba receiving the notorious “Order 66” from Emperor Palpatine.

Issue 2 has the entire galaxy coming down around Caleb’s ears, crashing in with the force of a Wampa. With no allies, the troopers he had considered his friends hunting him, and his Master gunned down, Caleb is on his own for the first time in his young life. In the middle of the Jedi Purge, this padawan has become listed among the galaxy’s most wanted. His only ray of hope is the message sent out by Master Obi-Wan Kenobi, instructing all Jedi still living to go into hiding, to conserve their strength, to wait for “a New Hope” (literally, I guess). Until then, Caleb has to learn some new lessons… how to survive on his own, how to do more than meditate on his place in the universe, and to disappear into it.

Okay, I’ve rambled on long enough (I should really have called this post “Cagekicker’s Soapbox, huh?). Go read the book… No, first go watch Star Wars Rebels (trust me, it gets better after the first couple episodes). Then go read the book. We’re deep into uncharted waters, and you’re going to want to be in on the ride… We’ve got a lot of open space to play in. 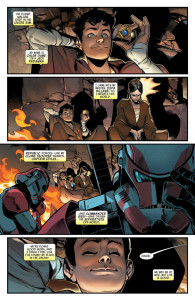 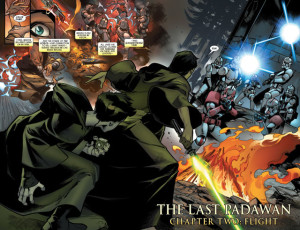 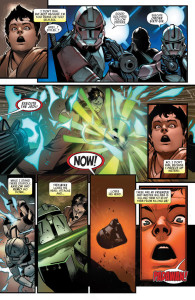