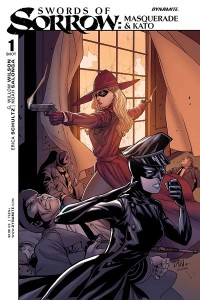 Swords of Sorrow: Kato and Masquerade (one shot)
Cover: Billy Tan
Writer: G. Willow Wilson, Erica Schultz
Art: Noah Salonga
Genre: Fantasy, Pulp Noir
A team-up set up by SWORDS OF SORROW’s Gail Simone, featuring the writers that she hand-picked: G. Willow Wilson and Erica Schultz! When Kato’s luxury getaway car, Black Beauty, takes on a mind of its own and goes on a rampage through the streets of New York, Masquerade is hot on its trail…but when the two clash, who will end up in the driver’s seat? Strange forces are at work and unlikely heroes must come together to solve the mystery!

The Swords of Sorrow storyline continues as two unlikely allies get together in the war against the mysterious Enemy. Their only link are the swords given to them by the Traveler’s Emissary, and the proclamation that they are among the generals standing against a great evil.

Mulan Kato, introduced in an outstanding story written by Kevin Smith (for a movie that he had planned before the Seth Rogan debacle got the green light…), and daughter of the original Kato, is trying to chase down her ride, the famous “Black Beauty”. By all appearances, her custom car has developed a mind of its own and is tearing up the streets without her.

Masquerade, a Golden Age heroine originally known as Miss Masque, possessing twin pistols and the power to dive into the minds of others, believes that Kato is the villain she and the Hornet pretend to be. She’s in pursuit to stop the Beauty, and Kato, but isn’t prepared for what she finds in the driver’s seat.

I think the bit of this storyline that I like the most is the complete and utter disregard for crossing boundaries. In no other crossover series could this team up ever work… and from what I’m seeing, the strangest is yet to come (Dejah Thoris and Iren Adler?!?). I’m looking forward to seeing what other odd couples Gail Simone and her merry band of rogues comes up with. What’s more, I’m looking forward to seeing the sparks that fly when Swords of Sorrow finally brings the opposing sides together… Red Sonja versus Vamirella? Bring it on!