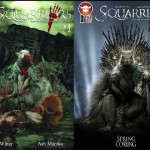 If you have been avoiding Squarriors because you think it’s just another Mouse Guard or Mice Templar, think again. The fine folks at Devils Due Publishing had to have something different up there sleeve than just creating some warring rodents to keep this book going. There had to be something more, and there is…much, much more.

Let me get into the story a bit. I don’t want to give too much away, but I will say that it is AMAZING! Yes, I’m only two issues in, but I want issue three NOW!  Page one of the first issue is not what I expected to see…humans? Really, I thought this was about bad ass rodents? There is a human element in the books because the dark adventures of these characters are playing out in what seems to be a post-human world. To quote Flight of the Concords, “The humans are dead.”  Or are they?

Our heroes are all members of the Tin Kin tribe, who in their now very medieval existence have a common problem that plagued the human race when we were still tribal, starvation. After a particularly harsh winter the Tin Kin have to make the hard choice of moving to, what could be, more fertile lands or join up with a rival tribe. There is where writer/creator Ash Maczko is really able to shine.  The political aspects of tribe facing extension, migration, or integration are horrifying, captivating, and to say the least very very layered. Maczko is weaving a story as complex as Game of Thrones or House of Cards in a world you would never expect.  As I turned the last page on issue two, I got a feeling that Maczko has big plans for both the long and short arcs for the series.

If you’ve seen even a cover of Squarriors, then you can tell the art by Ashley Witter is nothing short of glorious. The combination of story and art are just a pure joy to behold. Witter doesn’t cut any corners when it comes to the intricacies of these animals. They are detailed down to the last piece of fur and hook of a claw. Ms. Witter could have went with a more cartoony style like other animal based book, it certainly would have been easier, but instead choose for an almost hyper-realistic style. It works wonderfully.  You’ll be hard pressed to find a better looking comic.

Bottom Line: Squarriors is the kind of comic you show your stuck up non-comic reading friends (you still have those?) to show that this medium is a solid form of complex storytelling.