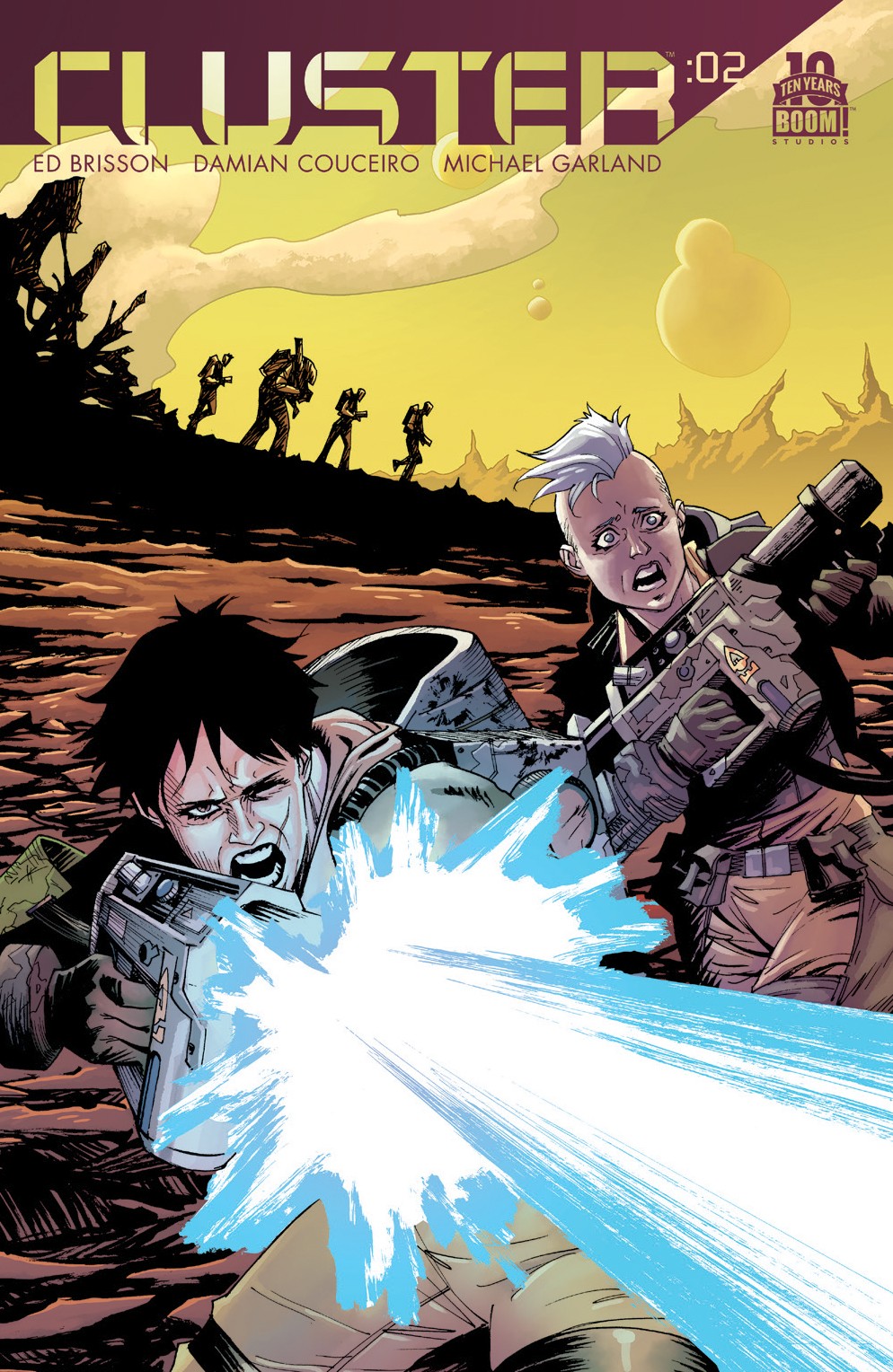 Samara and the other prisoners who managed to survive the Pagurani attack on the Towers are stranded on the battlefield, but they’ll need to find a way to trust one another before they can hope to find a transport to safety. They just better hope it happens before their Punch clocks hit zero…
——–

In equal parts, Cluster brings to mind The Dirty Dozen, Wedlock (aka: Deadlock), and Starship Troopers. Long and short, I love this title!

Through a controversial program, inmates are given the chance to “volunteer” to fight a war, commuting a life sentence into a fifteen year enlistment. It sounds all well and good, however by the second issue of the run, it’s becoming obvious that life sentences are being handed out like soap-on-a-rope (sorry, the candy analogy didn’t quite work for me here…). It seems that the idea of sending convicts out into space to fight has more appeal than sending soldiers. And how do we ensure a steady supply of fodder? I mean, volunteers? By making sure the pool of convicted lifers stays nice and deep.

Samara Simmons has fallen prey to the program, serving a life sentence as a consequence of a night of drunken revelry that ended with a nasty traffic accident and the death of her best friend. She’s got a hefty dose of survivor’s guilt, and not much else to get her through the day, so the prospect of being killed on an alien planet instead of living out a life sentence in prison might have seemed like a good idea. In a promising twist of fate, Samara might get her wish as she’s put on a mission that ends badly before it really gets started.

Her team is tasked with the protection of a terra-forming tower that’s come under attack by the Pagurani, an alien species determined to halt the humans’ efforts at colonization. In the opening moments of the battle, their transport ships are shot down and Samara’s squad finds themselves stranded in hostile territory, with limited time to hoof it back to base.

This is where my “Wedlock” reference comes in… Each inmate soldier is equipped with a “punch”, a device implanted in their chest that is set with a 24 hour countdown every time the troops are deployed. Make it back to base before the time runs out, and the clock is stopped. Don’t, and the results are… unpleasant.

By a stroke of luck, the remnants of Samara’s squad come across an alien trader outpost. Not necessarily “friendly ground”, but probably their best shot at getting a message back to base before their time runs out. And it’s here in this outpost that we see more evidence that things aren’t as cut and dried as we might’ve been led to believe. You can smell conspiracies in the air, thick as a London fog, with Samara Simmons and her troop firmly in the middle of it.

The writing and character play is well done, and the art work is dynamic and clear. There’s violence to be done out there, and Cluster’s team brings it to us in grand style. I look forward to the next installment, and you should too.