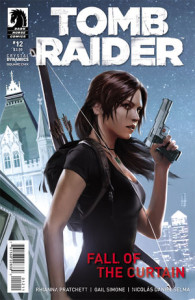 GAIL SIMONE WRITES LARA CROFT!
As Lara’s journey continues she finds herself in a deadly showdown against a sinister killer. If Lara can’t finish what she started she’ll lose more than her life, as the final chapter of this pulse-pounding arc comes to a close!
* The official continuation of Lara Croft’s story!
* The Tomb Raider video game has sold over 6 million copies!
* Cover by the game’s art director!
——–

Gotta be honest, I’m pretty hesitant to take a look at comics that are based on movies… And I’m downright loathe (seriously, who talks like that? “Loathe”?) to read comics based on video games. Nine times out of ten, the story is weak, the art is standard at best, and in the case of a really popular title, with a character that’s developed into a fan favorite, it just doesn’t live up to the fans’ standards.

Thank whoever out there is paying attention then, that Dark Horse hasn’t hit the nine out of ten on this title.

Let’s face it. To the average Joe out there, Tomb Raider is either a buxom bouncy character they get to run around (all the while happily enjoying their third person perspective… gamers, you know what I’m talking about), or she’s Angeline Jolie jumping around on the big screen in a very average major motion picture. To the avid and loyal fans out there, she’s a little bit more. People have followed Lara Croft’s adventures through the video games, attributing her with a personality that can be only hinted at in sporadic cut scenes.

This is the first issue I’ve read in Lara’s continuing Dark Horse adventures, and I don’t think it’s going to be the last. This issue picks us up as an established villain in the series comes calling for revenge. It’s almost a “one-shot” type of story, with a quick resolution, and as a first time reader it plays out very well as a character piece. We get a little look into Lara’s head, get a glimpse at her motivations, and see some of what makes her a character that deserves a solid story telling treatment.

Read this story. Don’t even do it with the idea that you’re going to go out and buy all the back issues. Just read it because in all honesty it’s a good little snapshot into the life of a character who’s become a solid fixture in our pop culture.