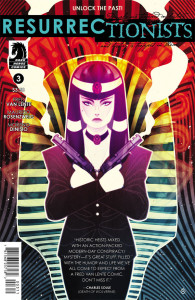 Resurrectionists #3  (Dark Horse – Van Lente / Rosenzweig / Dinisio)
The Maker must be unlocked . . . In order for Jericho Way to call upon the memories and abilities of his past lives, one of his fellow Resurrectionists must kill him. Kinda. Almost. As long as he doesn’t permanently die in the process. Once he’s near-death experienced, he can use the knowledge he’s gathered over millennia of lifetimes. But with that knowledge comes grave danger—the Sojourn Corporation is now hot on his heels!
——–

A team of master thieves, caught in an endless loop that’s carried them across time, are coming together again. They have a job, and until that job is completed, the cycle reincarnation won’t end. The one thing they have going for them is that once “unlocked”, they’re able to remember all of their past lives and utilize all of their skills.

As architect turned thief Jericho Way is dragged back into this world of chaos and reincarnation, he’s drowning. Turns out, the path to being unlocked starts with a near death experience. An old friend, “the Scout” has tracked him down and opened his eyes to what and who he was/is. The Maker, formerly a master architect responsible for designing and building pyramids for the rulers of ancient Egypt. Now Jericho needs to unlock the next member of their group, the Double. But as an art dealer named Quinn, she’s not so keen on the idea.

Resurrectionists brings all of the criminal charisma and intrigue of “Ocean’s 11”, and successfully blends in Egyptian mythology to bring us something completely new and totally entertaining.