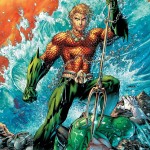 In a report from The Daily Mail, Jason Momoa has a deal to portray Aquaman for a set of four movies. Momoa is famous for is lackluster turn as Conan, and dominating every scene he was in as Khal Drogo on Game of Thrones.

Jason recently spoke about his take on Aquaman during a comic convention in Brazil, “He will be bad-ass, otherwise they wouldn’t cast me for the role.” He went on to say that his initial deal is for four films including Batman vs. Superman: Dawn of Justice.

Jason avoided any specific questions about the upcoming films, because he likes his job, but did say how impressed he is with Zach Snyder. Reportedly saying that he’s like Zack to take the directors chair for Aquaman.