Eric
Comic News, Pullbox Previews, READ, Valiant
Comments
Earth is about to meet a new god. And he’s a communist. How long can it be before the first confrontation between mankind and DIVINITY begins?
Valiant is proud to present your first look inside DIVINITY #1 (of 4) – the FIRST ISSUE of the new prestige format VALIANT NEXT limited series from New York Times best-selling writer Matt Kindt (RAI, Mind MGMT) and blockbuster artist Trevor Hairsine (ETERNAL WARRIOR, X-Men: Deadly Genesis). On February 11th, don’t miss the beginning of an astonishing new era as the being called DIVINITY makes his landmark first appearance…and changes the world in his wake.
At the height of the Cold War, the Soviet Union – determined to win the Space Race at any cost – green lit a dangerously advanced mission. They sent a man farther into the cosmos than anyone has gone before or since. Lost in the stars, he encountered something unknown. Something that…changed him. Long thought lost and erased from the history books, he has suddenly returned, crash-landing in the Australian Outback. The few that have been able to reach him believe him to be a deity – one who turned the scorched desert into a lush oasis. They say he can bend matter, space, and even time to his will. Now the rest of the world’s powers must decide for themselves – will the enigmatic DIVINITY offer his hand in friendship or will Earth’s heroes find themselves helpless against the wrath of the divine?
Find out on February 11th as DIVINITY #1 (of 4) presents the coming of the being that will reshape the Valiant Universe! From the minds of all-star creators Matt Kindt and Trevor Hairsine, discover why Valiant is the premier storytelling company in comics today with all-new vision of 21st century science fiction unlike anything else on the shelf, only in DIVINITY #1 (of 4) – featuring covers by Jelena Kevic-Djurdjevic (Thor), Tom Muller (Zero), Trevor Hairsine (Captain America), and Lewis LaRosa(BLOODSHOT).
Debuting in the deluxe VALIANT PRESTIGE format, DIVINITY #1 (of 4) completes complete with matte-laminate card stock covers, custom-designed end sheets, exclusive back matter, and much more – all with no advertisements and a standard $3.99 cover price! Contact your local retailer to pre-order your copy today – and look for an exciting new VALIANT NEXT title each month in 2015. Beginning with THE VALIANT #1 (of 4) by all-star creators Jeff Lemire, Matt Kindt, and Paolo Riverain December, VALIANT NEXT continues with five blockbuster new series starring Valiant’s biggest, most-demanded heroes alongside all-new, never-before-seen characters:
For more information, visit Valiant on Facebook, on Twitter, on Tumblr, and at ValiantUniverse.com.
For Valiant merchandise and more, visit ValiantStore.com.
DIVINITY #1 (of 4) [VALIANT NEXT]
Written by MATT KINDT
Art by TREVOR HAIRSINE
Cover A by JELENA KEVIC-DJURDJEVIC (DEC141707)
Cover B by TOM MULLER (DEC141708)
Valiant Next Variant by BUTCH GUICE & TOM MULLER (DEC141709)
Character Design Variant by LEWIS LAROSA (DEC141710)
Artist Variant by LEWIS LAROSA (DEC141711)
Blank Cover also available (NOV148093)
$3.99 | T+ | 32 pgs. | PRESTIGE FORMAT | ON SALE 2/11/15 (FOC – 1/19/15) 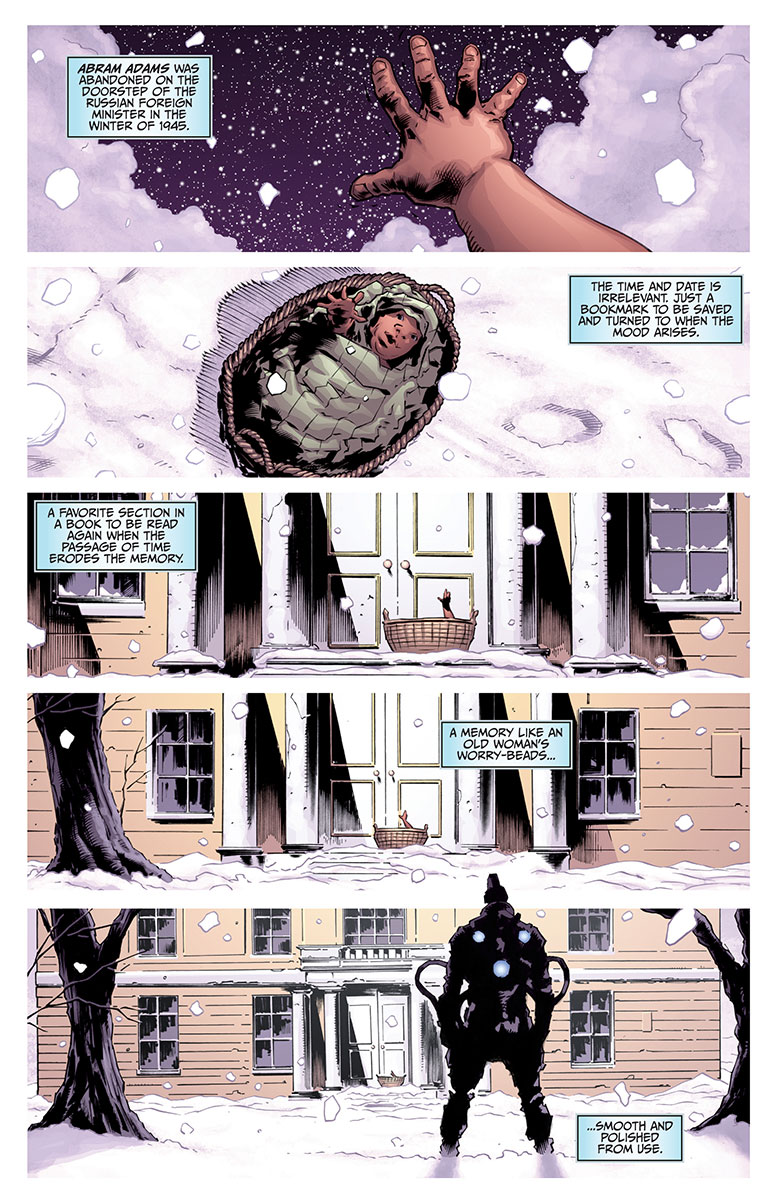 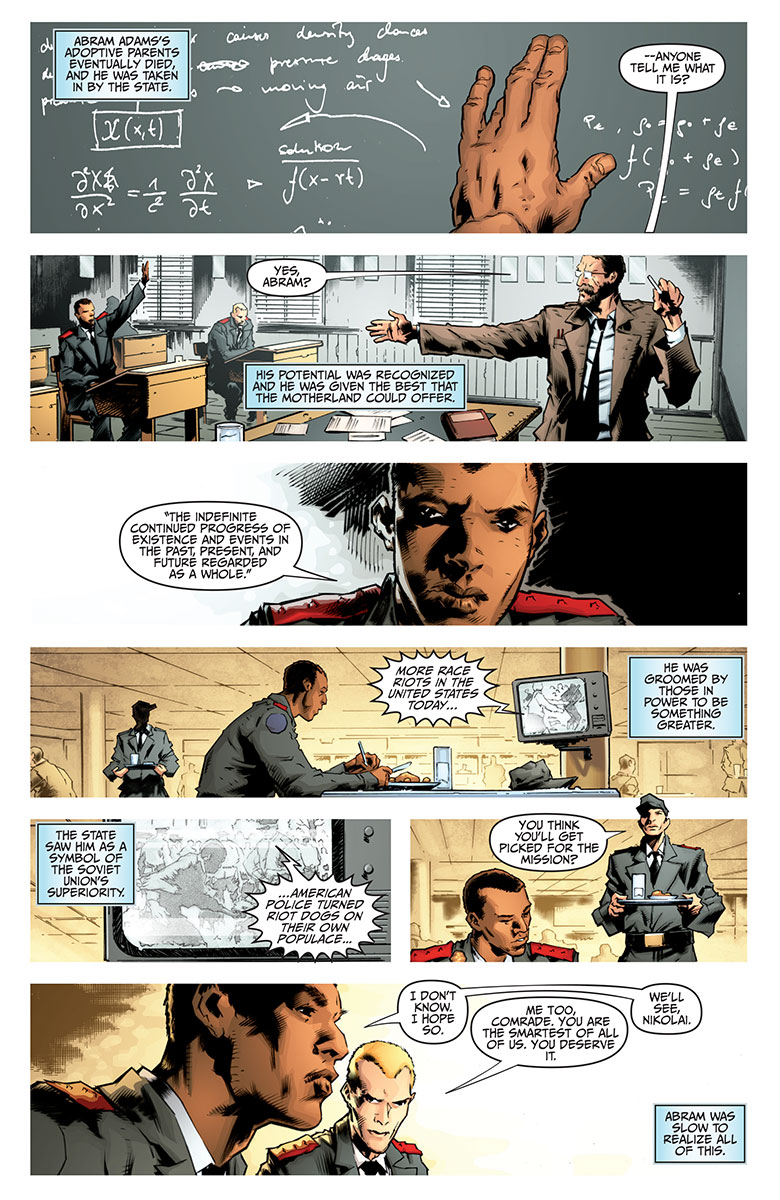 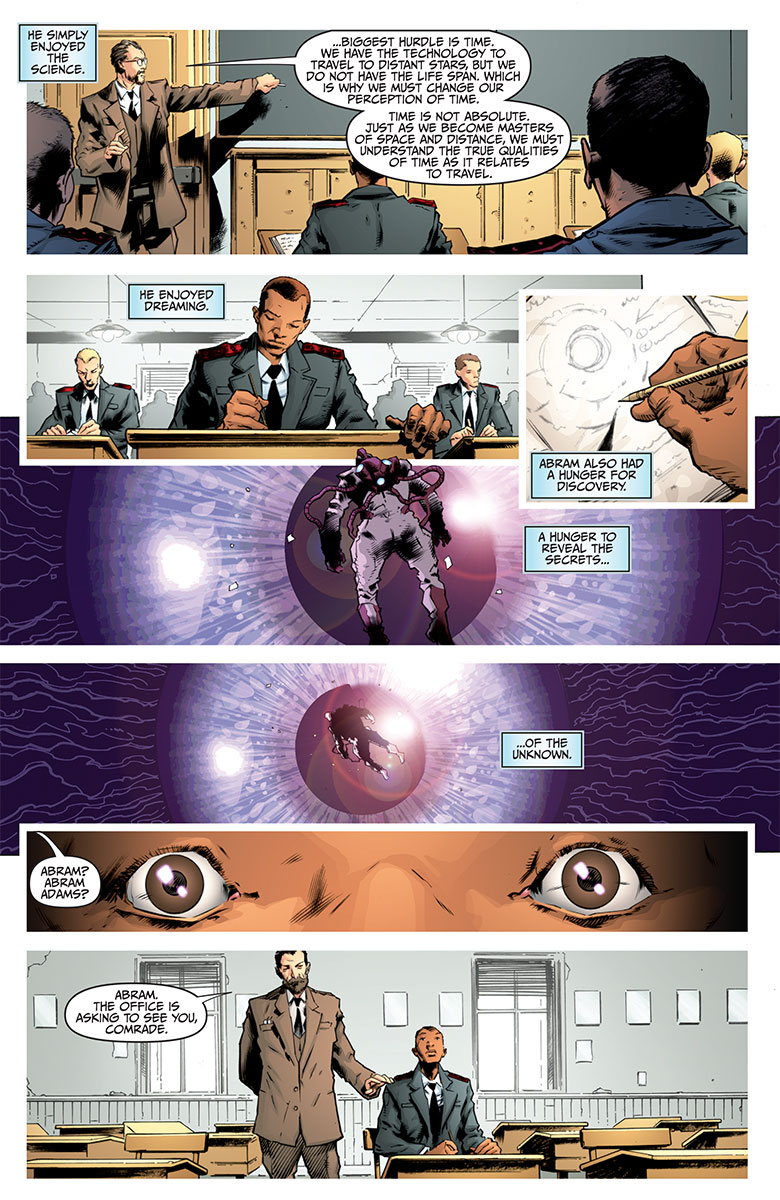 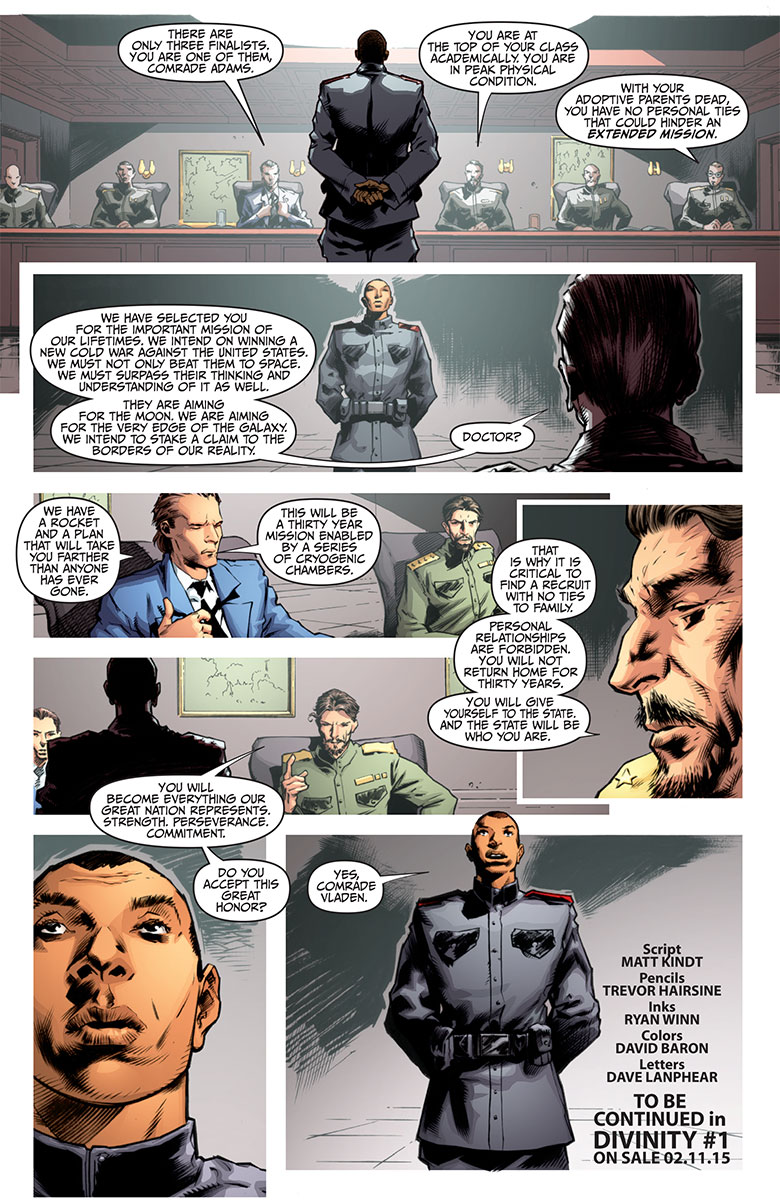 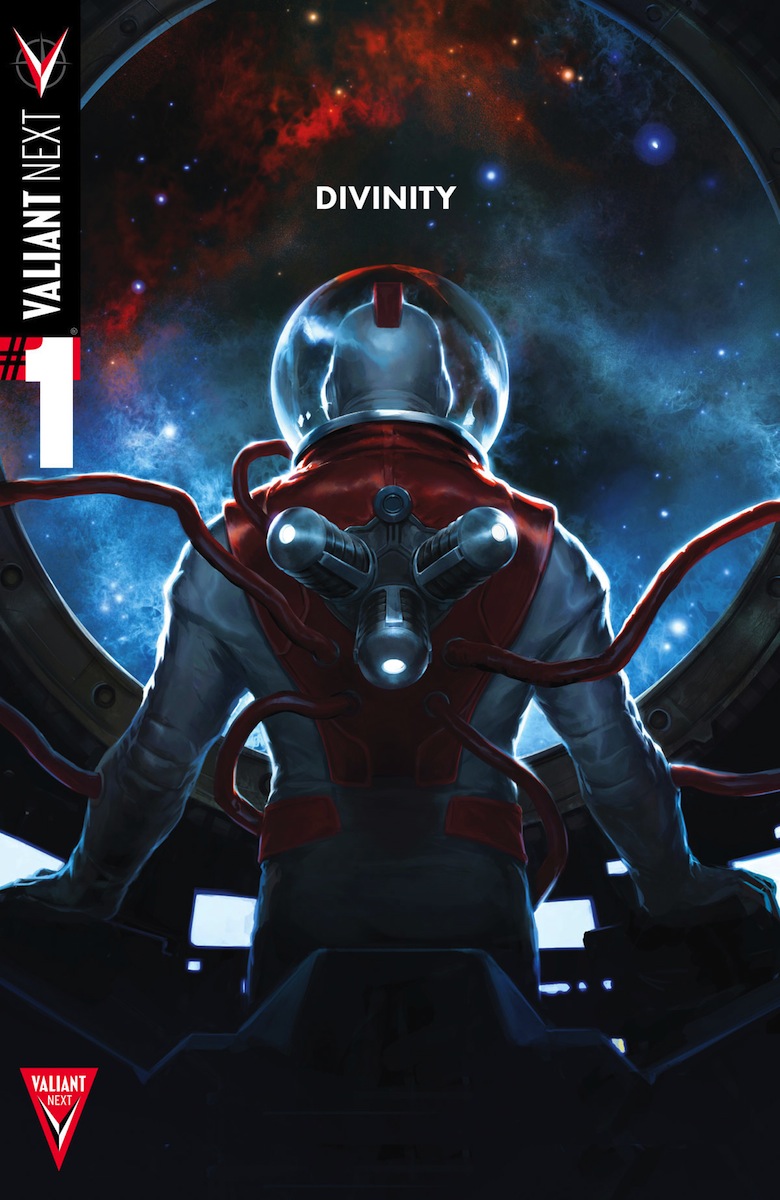 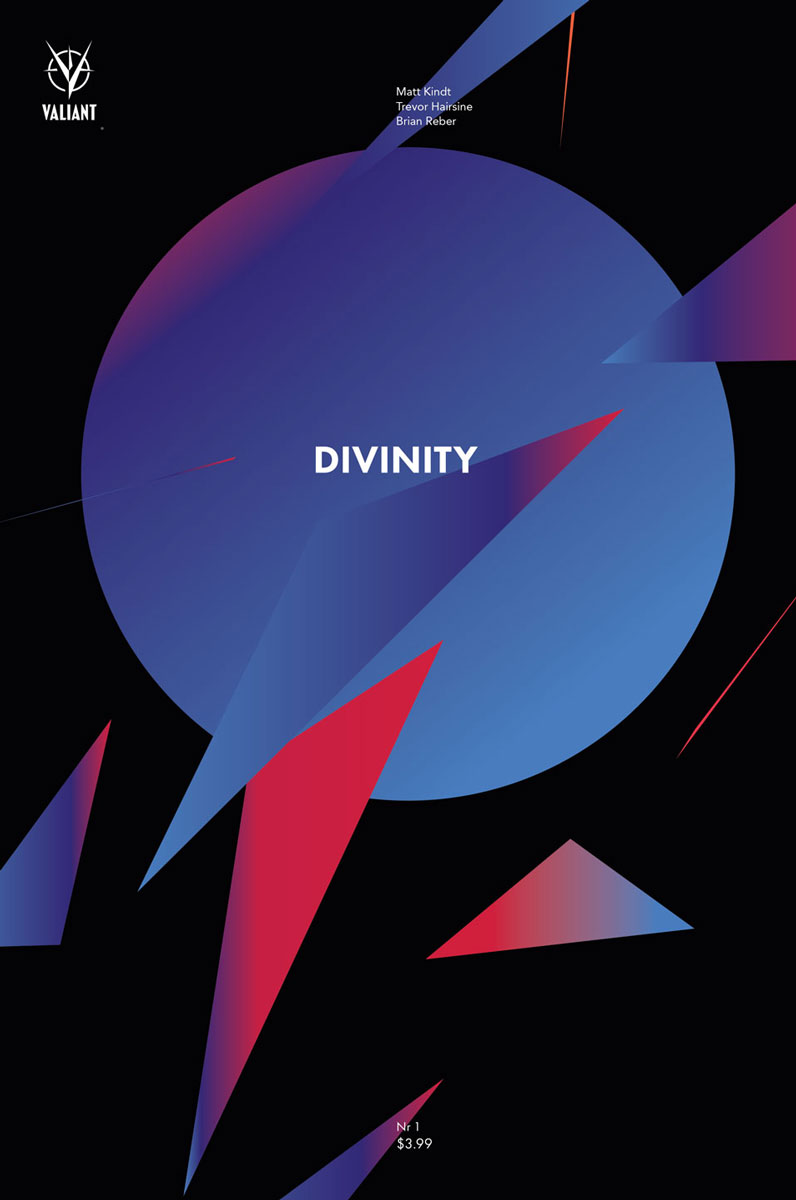 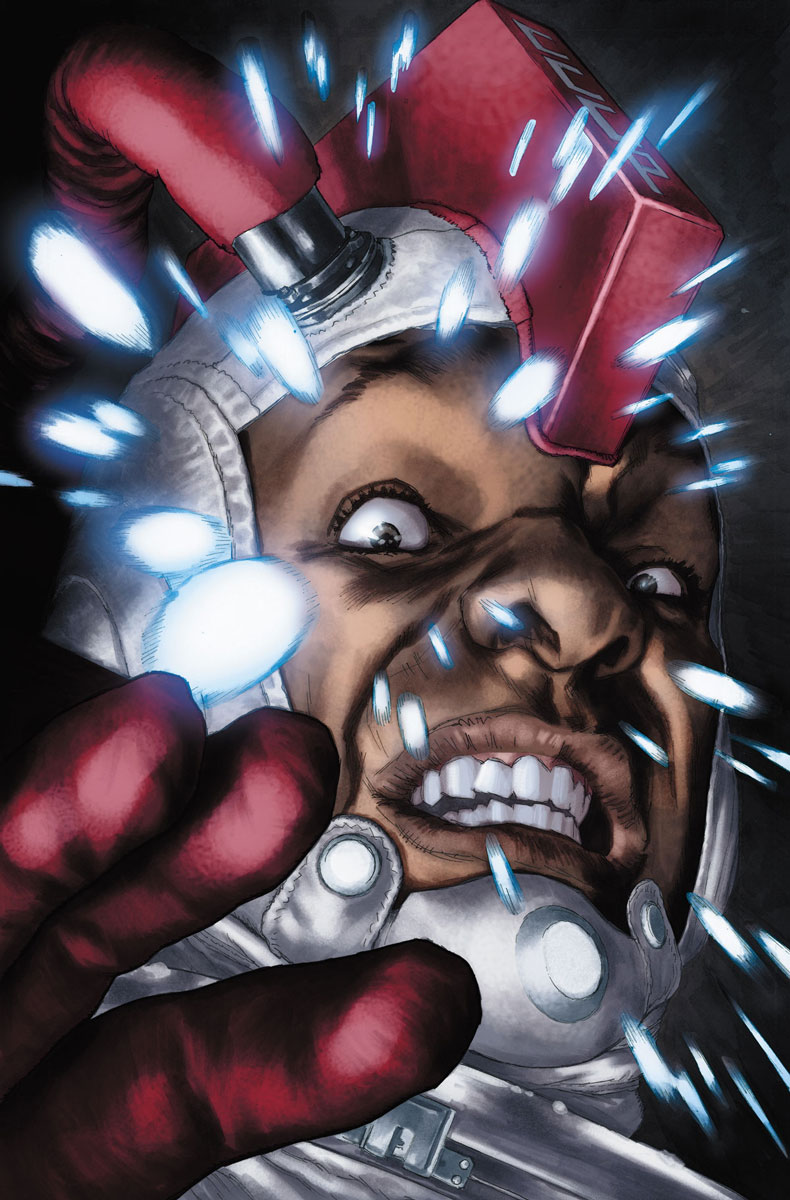 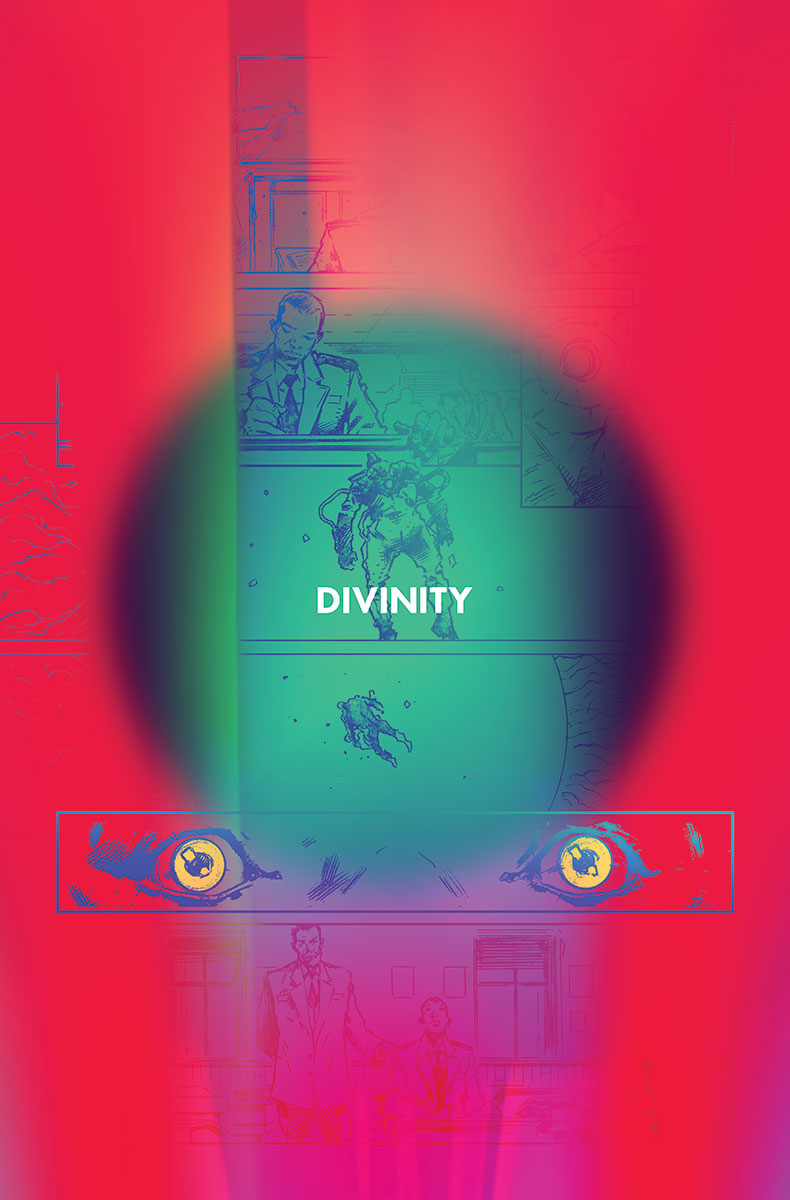