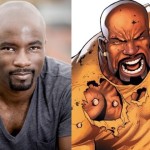 Colter, who currently plays Jameson Locke in the Playstation Network original series “Halo: Nightfall,” will debut during the premiere season of the Netflix original series.

“During the course of an investigation in New York City, private investigator Jessica Jones encounters the enigmatic Luke Cage – a man whose past has secrets that will dramatically alter Jessica in ways she could never have imagined,” Marvel officially stated on the character’s debut into the Marvel Cinematic Universe.