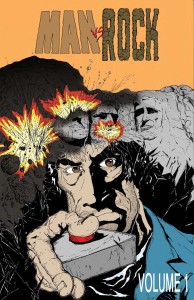 Rocks are plotting to annihilate the human race. If we don’t act soon, those filthy rocks will kill us all during their surprise attack! Only one man has the rocks to stand up to these villains: Buck Stone. Join Buck in his quest to save us from the evils of those granite goblins! This is the first volume of the epic tale of Man vs. Rock. In this volume you will encounter the origin story of humanity’s oldest feud.   Read this comic book and you are guaranteed to be one of the few survivors that will help re-populate the earth after the rocks attack.

In the words of the creators “It’s an irreverent, absurdist comedy… If you like high taxes, Indiana Jones 4, and the band Creed, you’ll LOVE Man vs. Rock! “. Me personally, I put MvR a tad bit higher than both Creed and the Crystal Skull. My take is that if the living embodiment of the National Enquirer and Oliver Stone had an illegitimate NC-17 love child – it would be Man vs. Rock!

The story, smartly told by authors Victor DeTroy and Kevin Bieber, starts off with some cheeky revisionist history but quickly brings the readers to the place where they have to come to terms with what if the very rocks we walked upon (and that we walked upon and spat on for ages untold) decided to rise up and take out the human race! Never mind the science behind it, that’s not really important here – what is important, is how would we as a species cope? How do we fight back? How would we survive? Buck Stone is the one geologist that saw this coming, and now he alone has a game plan that can save the human race! It is a very fun read and artist Jared Lamp frames a very fluid ink and line-centric landscape in which to tell this entertainingly absurd narrative.