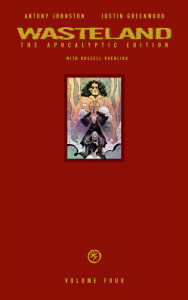 100 years after the Big Wet, Earth has been left a broken, infertile world of rock and sand. The town of Providens is like many others on the post-Big Wet planet: small, mostly illiterate, and struggling for survival. When the town welcomes a stranger named Michael into its midst, will the quiet man lead them to a brave new world or shatter what little order still exists?

From the writer and the artist of Queen & Country: Declassified: Sons & Daughters comes a bold new ongoing series that bends genres and conventions in a way that only comics can!

Living in the ruins of what was, young Diana spends her days exploring, satiating her curiosity uncovering relics of the old world and getting her thrills running across the rooftops to stay away from the Dwellers. This is the life of a child growing up in a post-apocalyptic “Wasteland”. Diana and her father Thomas live in the small town of Providens. It isn’t much different from many towns out there, living in the shadow of a larger city, picking the bones and doing what they can with whatever scraps they find. Aside from the obvious dangers- the Dwellers, and ravenous Wulves to name a few- things seem pretty quiet.

Enter the wandering strangers, the staple of every post-apocalyptic epic, bringing change, sometimes danger, and occasionally hope. Michael and his traveling companion Abi have stumbled onto this small oasis, and despite all of their good intentions, they might just have brought Hell with them.

This series brings to the page what looks like an epic story that spans a blasted globe. In just a few pages, the creative team of Antony Johnston, Russell Roehling, and Justin Greenwood have opened a door onto a huge world canvas. This being a collected edition over three hundred pages long, I can’t even start to summarize or give final impressions. What I can say is that I’m sorry I missed out on this story from the beginning. I can also say that it’s definitely got my attention, and I’ll be taking a deeper look….

Now if I can just get past my tendency to give the characters Australian accents.