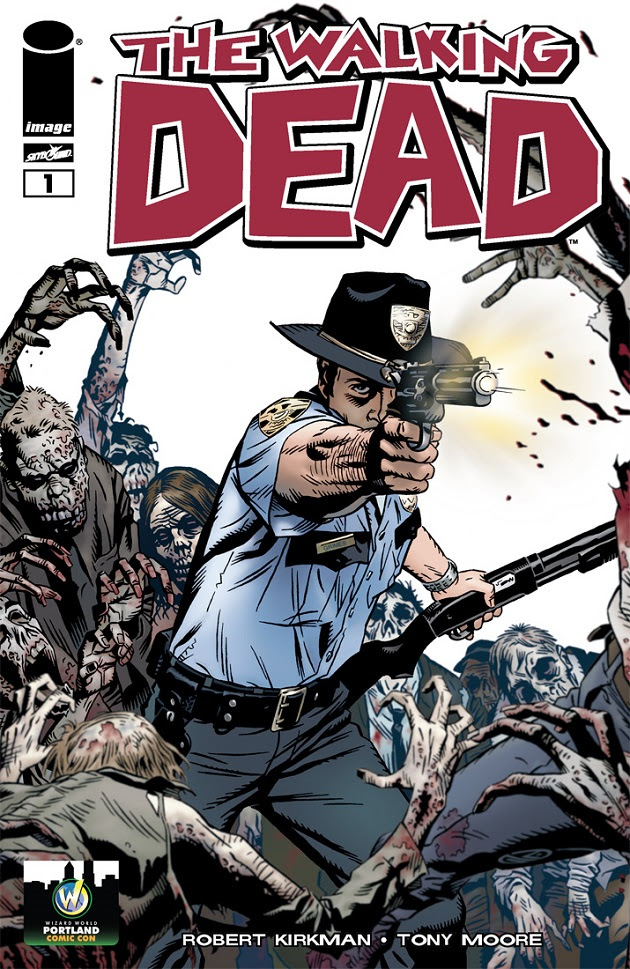 Skybound’s The Walking Dead created by Robert Kirkman, the groundbreaking, Eisner Award winning comic book series, continues to captivate audiences worldwide. With anticipation high for the debut of Season 5 of the television series in a few weeks, Skybound, Kirkman’s imprint at Image Comics, and Wizard World, Inc. (OTCBB: WIZD) today announced the launch of an entirely new series of Limited Edition Exclusive Variant Covers of popular issues ofThe Walking Dead comic, to be provided free to all full-price attendees at every Wizard World Comic Con event in 2015.Superstar artists who regularly appear at Wizard World events will draw the unique covers for each of the 24 shows scheduled to date, beginning with Wizard World New Orleans Comic Con, January 9–11 at the Ernest N. Morial Convention Center. The artists for each book will be announced as they are selected. A similar series in 2013 featuring exclusives of The Walking Dead #1 proved to be wildly popular with fans.The exclusive The Walking Dead editions will be produced in extremely limited quantities and are available at registration to fans only while supplies last at each Wizard World convention. VIP attendees will receive an additional black & white sketch version of the comic. The full schedule of 2015 Wizard World shows is available at www.wizd.me/PRSchedule2015.“Skybound is pleased to work with Wizard World and many talented artists to bring this series to thousands of fans,” said Kirkman, “Wizard World attendees have been great supporters of The Walking Dead for years, so these books are particularly appropriate for this audience.”“Wizard World fans have shown a strong desire for everything The Walking Dead, and we are proud that this partnership with Robert Kirkman and Skybound will allow us to give these books free to all of our paid attendees,” said John Macaluso, Wizard World CEO and President. “We have seen the rise in popularity of The Walking Dead, from popular celebrity guests like Norman Reedus, Jon Bernthal, Michael Rooker and many others, to cosplay of dozens of characters, to artwork and merchandise at our shows. We know that fans will appreciate the return of one of our most popular promotions ever.”About Robert KirkmanRobert Kirkman is the creator of many popular comic books, including the Eisner Award-winning The Walking Dead, long-running Invincible, all-ages Super Dinosaur, and the new exorcism comic, Outcast which was released in June 2014 and recently received a pilot pickup for CINEMAX with Fox International.Since entering the comics scene with his self-published cult-hit Battle Pope in 2000, the Kentucky native has risen to fame as one of the most successful names in comics and entertainment. In 2008, Kirkman became a partner at Image Comics, and in 2010, he opened Skybound, his own imprint at Image, which publishes his titles as well as other original work. That same year, Kirkman continued to expand his presence in the entertainment industry, becoming a creator, executive producer and writer on The Walking Dead television show. The show is in production on its fifth season and has become the highest-rated basic cable drama of all time. To date The Walking Dead is the #1 on television among the coveted 18-49 demo. Kirkman is also slated to executive produce AMC’s upcoming The Walking Dead companion series. Under the Skybound Entertainment umbrella Kirkman wrapped production on his first feature film, Air, starring The Walking Dead’s Norman Reedus and Academy Award-nominated actor Djimon Hounsou.About Skybound EntertainmentSince opening its doors in 2010, Skybound Entertainment has grown into a multiplatform entertainment company. Skybound CEO Robert Kirkman is creator of the award-winning The Walking Dead comic book series, the inspiration for the hit TV show of the same name where he serves as creator and executive producer. To date The Walking Dead is the #1 on television among the coveted 18-49 demo. Skybound Entertainment and Kirkman just wrapped production on their first feature film, Air, starring The Walking Dead’s Norman Reedus and Academy Award-nominated actor Djimon Hounsou. The film is slated to be released in the spring of 2015.Skybound released Kirkman’s new exorcism comic, Outcast, in June 2014 which recently got the green light for a television pilot with CINEMAX and Fox International. Kirkman will serve ascreator and executive producer of the series. Skybound Entertainment and digital entertainment company Maker Studios recently announced a deal for the studio to produce and air four digital series based off Skybound IPs. Comic book titles published by Skybound include The Walking Dead, the superhero-comic Invincible, all-ages comic Super Dinosaur, the revenge drama Dead Body Road, and heist comic Thief of Thieves.Skybound also creates a wide range of merchandise, including video games, apparel, board games, and action figures. For more information, please visit Skybound online at www.skybound.com and www.thewalkingdead.com.About Wizard WorldWizard World (OTCBB: WIZD) produces Comic Cons and pop culture conventions across North America that celebrate the best in pop-fi, pop culture, movies, television, cosplay, comics, graphic novels, toys, video gaming, sci-fi, gaming, original art, collectibles, contests and more. A first-class lineup of topical programming takes place at each event, with celebrity Q&A’s, the Wizard World Film Festival, comics-themed sessions, costume contests, movie screenings, evening parties and more. Wizard World also produces socialcon featuring social media stars and will be launching ConTV, a digital media channel in partnership with leading independent content distributor Cinedigm™ (NASDAQ: CIDM).Full event information can be found at www.wizd.me/PR.Wizard World Remaining 2014 ScheduleOctober 31-November 2 – Wizard World Ohio Comic ConNovember 7-9 – Wizard World Tulsa Comic ConNovember 21-23 – Wizard World Reno Comic ConWizard World 2015 schedule available at: www.wizd.me/PRSchedule2015.