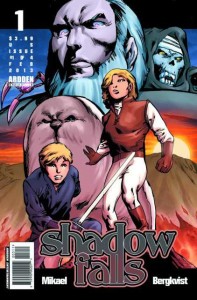 A shadow is falling across the lower lands as a young girl named Arya finds herself caught up in a war between the forgotten races and a mysterious enemy known only as The Master!

(I’m throwing a review on the first two issues of this series, mainly because both have been previously released. Another reason is that some of the problems that I had in the first issue were rectified in the second.)

In issue #1, we’re introduced to a young girl named Arya. She’s the sole survivor of an attack on her city, perpetrated by the uber evil conqueror known only as The Master. The Master’s unprovoked attack is made even more, dare I say, Evil because through his necromantic powers he’s able to animate the dead to add to his army. He also commands a horde of wicked creepy spider-things that will attach themselves to a city’s defenders and bend them to the Master’s will.

Issue #2 brings the group of refugees/rebels to the kingdom of Drahker, past the Great Northern Wall. The Wall is their first obstacle, as it’s held by an honorable but hardened warden and his blind son. We’re also given another piece of the puzzle behind Myrn’s origins, as the gatekeeper refers to him as “one of the old ones”, and allows Myrn and his group past the gates based solely on that.

Arya runs away from her city and makes her way to home of Kheel and his adopted son Myrn. We’re shown early on that Myrn is a troubled youth, mainly due to his mysterious origin (he’s got pointed ears, so I’m betting on “elf”). It’s about now that one of the problems I had cropped up… The story seemed to rush along, jumping past the “getting to know you” stage as the main characters are brought together. We go from the first meeting right into “Hey, we just met, and this is crazy, but you seem trust worthy (so call me maybe?).” My impression was the creator/writer/artist of the series, Mikael Lars Berqkvist wanted to move along and get into the meat of his story. There’s nothing really wrong with that, I just felt that there were a few leaps of logic and storytelling that might have been taken a little more slowly. This is also one of the things that was, for the most part, resolved going into the second issue.

What really stands out on this series, to me, is the art. I like Berqkvist’s style… it reminds a bit of the work on the old “ElfQuest” series… and has some similarity to the work of Neal Adams. I think that it makes up for some of the pitfalls of starting up a series from scratch as both the writer and the artist. Hopefully, with some attention and word of mouth, the series can gain some momentum. Personally, I’d like to see more.