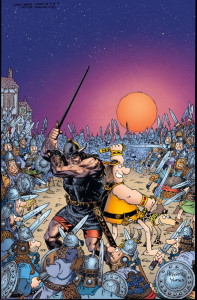 The final showdown between the world’s greatest warrior and comics’ biggest idiot! Conan fights for his kingdom, Groo fights for his bakery, and Sergio and Mark fight for their comic shop . . . Triple story lines collide in a chaotic climax of barbaric proportions!
* Wanderer vs. Barbarian!

To quote an all-time favorite and classic, “Dogs and cats, living together… mass hysteria!”

That should sum up this title for anyone not in the least bit familiar with the antics of “Groo the Wanderer”, idiot savant and creation of Sergio Aregones, who first appeared way back in 1981. Groo was the… sure, we’ll call him a “brain child” of Aregones, best known for his contributions to the long running (and often slightly left of center) Mad Magazine. Fans of Groo need no introduction to the character… or anything resembling logic, continuity, or good sense, for that matter. Groo just is. He is a force of nature, and chaos is his herald.

Conan the Barbarian, long beloved hero and creation of Robert E. Howard, subject of decades worth of comic books, star of multiple motion pictures, copied more times than any Kinko’s could claim credit for, is Groo’s antithesis… Where Conan is calculating and driven by his barbaric sense of honor, Groo is just in it for the “fray”. The two are polar opposites, whose meeting should be the comic book equivalent of “crossing the streams”.

If this were a book that was meant as a straight up comic book crossover, there would be absolutely nothing here that worked. Instead, what we are given is an example of barely controlled Chaos, penciled, inked, and more or less dialogued, with no regard for the fourth wall… or any wall, for that matter. This book crosses back and forth with parallels aplenty, moving between the “real world”, Conan’s Hyborian Age, and Groo’s… well, we’re not sure what to call Groo’s world of anarchy, historical inaccuracy, and general “creative license”. Groo just is, and for his fans that has always been enough.

What’s important here is that this title takes itself seriously, only in the sense that the overall intent is to take what’s generally seen as “serious”, and to do unspeakable things to it. In the story, even Conan is at a loss as to how to take his situation… and let’s take a minute to think about that. Conan the Barbarian, slayer of kings and monsters, conqueror of legions, despoiler of kingdoms uncounted, has no solution to the conundrum that is Groo.

Any reader of comics with no regard for reason should take this title as an opus, an anthem crying out and tolling all that is completely irreverent and right in the medium. A reader of comics who prefers their titles logical, orderly, and beholden to societal norms should move on and count themselves fortunate that Groo hasn’t found his way into their neck of the woods… because Groo is the best there is at what he does best.

Final Grade… wait for it… A+