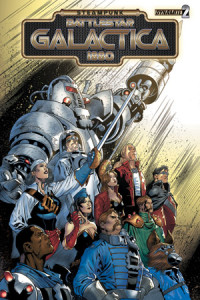 As the Colonial Fleet gather together under Arch-Duke Adama, Athena and Starbuck find themselves captured by the pirates of the Rising Star! Will Apollo and his friends defeat Professor Baltar’s Cylonic Knights – and what secret will they discover? Come with us on this Steampunk re-imagine of Battlestar Galactica by #1 New York Times bestselling author Tony Lee!

Where do I start?
Okay, how ‘bout this… Take a little bit of old (Buster Crabbe old) Flash Gordon, add some Pirates of the Caribbean, and then top it off with the storyline of the classic Battlestar Galactica television series. If any of that sounded the least bit worthwhile, I don’t know why you’re wouldn’t be reading this series.

Issue 2 brings us in right after Baltar’s clockwork “Cylonic Knights” have staged their attack against the colonies. Archduke Adama, aboard the Aethership Galactica, guides a ragtag fleet of seventy ships away from danger. Loveable rogue, Starbuck, has been tasked with rescuing Adama’s daughter, the Lady Athena, from the pirate queens Cassiopiea and Sheba. Adama’s son, Lord Apollo, is a prisoner of the Cylonics on the planet Helia.

Seriously, this comic couldn’t have been more of a sure thing for me… I know, I’m supposed to be giving an honest and informative review, but they managed to hit pretty much every fanboy button I have: epic science fiction classics, steampunk, evil robots, and space pirates. I don’t know what else to say.  The artwork reminded me a little of the old Flash Gordon and Tarzan comic strips from the newspapers.

I don’t know if that was deliberate to fit the material, but it’s great. The storyline zips the reader from scene to scene, and back again, with the frenetic pace of the old movie serials. They managed to completely overhaul the work of Glenn Larson, fitting it all into a steampunk setting, while still keeping it all recognizable for fans of the source material.

If there could be one hang-up in the book, it might be that pace… we’re switched between three different settings and situations pretty quickly, so some might have trouble “investing” in what’s going on. Other than that, I see a good time a-brewing here. Looking forward to the ride.