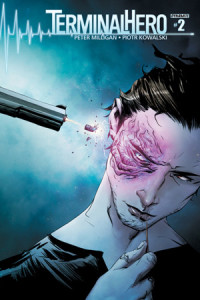 Terminal Hero #2 (Dynamite – Milligan / Kowalski) Peter Milligan continues with his vision of Terminal Hero! Rory always thought he was a good man, but that seems like a long time ago. Still reeling from the terrible side-effects of Treatment Q and the fact that he killed his best friend, Rory’s life now takes an even darker and more complicated turn when he’s approached by two members of British Intelligence. After a strange meeting with what’s left of the man who developed Treatment Q, Rory is desperate to escape from the violent new life he’s being forced to lead. But is he will to pay the price?

Came out this week!

Okay, I went into this title just looking for something different. I got it. Still not totally sure how I feel about just how different it is, but I still have to say that there’s something here for a lot of people.First and foremost, I’m going to say that this is not a title for kids, and if it was a movie it would be carrying a definite ‘R’ rating for nudity, violence, and language. I’m no prude, so none of that is where I had difficulty.

The story follows Dr. Rory Fletcher, who we’re told has a fatal tumor in his head. In the first issue, Dr. Fletcher underwent an experimental treatment that did nothing to remove the tumor, but it opened up his mind’s ability to deal with it. This also opened up his mind to uncharted psychic powers. Enter the British intelligence Agent Davenport, and her list of “things to do”… mostly it’s a list of people she wants killed.

Rory takes to his new job as an assassin reluctantly, but his reluctance doesn’t seem to have much to do with any moral dilemma. Rory is, at heart, a coward. And a drug addict (the therapy he uses to cope with his new abilities and situation seems to be a line of cocaine). And a little bit of a pervert. All of these traits work together with the dialogue, both internal and external, to give us a title character that just isn’t very likable. He’s whiny, and violent, and has no problem with killing for the British government to support his habits.

The saving grace is that we’re given some insight into an inner turmoil. Rory’s abilities have opened up what I’m thinking of as a direct line to his “Id”. Every base instinct and urge is doing its damndest to push its way to the forefront, for full control of Rory’s life. The fact that he recognizes this, and is taking steps to resist his inner demons, gives some hope that he’s not a total loser.

All of this, when taken into the context of a larger and developing story, brings us the potential for a very deep and layered bit of storytelling. Enter with caution, as this story is NOT going to be for everyone, but it is going to find an audience… Some will be looking for the cheap thrills of sex, drugs, and violence, but others are going to be pulled into an adult storyline that pulls no punches and sugar coats nothing.