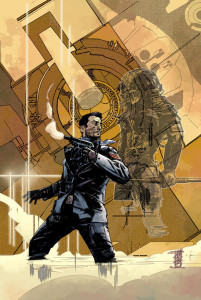 A universe of terror drawn to one world.

As the Perses begins her long journey home, a deadly stowaway forces the crew into a savage conflict! While the crew defend themselves against this unseen predator, the hunter itself stalks a much more substantial game!

So here’s a comic that I was happy to review.  It had a lot of the things that I’ve always been a fan of in both comics, and the sci fi action movies that I remember from “Ah-nold’s” heyday.  There was plenty of action to be had, and it started almost from the gate.  There’s no time for warm ups when you’ve got an alien hunter stowed away aboard your ship.

This is exactly what the crew of Perses has to deal with, waking up from cryo-sleep to the harsh reality that as much as they’d like to think that they’re the hunters, that really isn’t the case.  The pace starts out at a sprint and doesn’t let up until the last panel.  In that last panel, we finally see what the true prey is…

Will everyone find something they like in this book?  Possible, but some of the leaps of logic and dialogue might put some off.  Those people should go look for a more cerebral read, cuz that isn’t what a book with “Predator” in the title should be about.  This book brings us through the paces with some sharp artwork that I’ve seen compared to the work of Neal Adams, and I can’t disagree with that at all.  One problem that some might have is the speed at which you’ll tear through this book.  With all of the action panels zipping by, most will be at the end before they know it.  Some might think this is too abrupt, not giving them enough time to get into the story, but I don’t think a long drawn out narrative is what the team behind the title were going for.  This is your Dad’s fast moving, often implausible, always violent action movie, brought to the pages of Dark Horse comics.