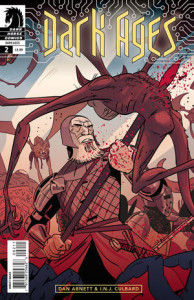 As hell comes forth from the skies above, the heathen war band seeks refuge and redemption in a fortified monastery. But inside lies a dark secret that could ensure their salvation—or seal their fate

The story in issue two picks up as a mercenary company is holed up in a monastery, recovering from a battle with demons that went badly… particularly for their captain was seriously injured (missing an arm, and he’s no Black Knight). Their second in command, ironically (?) named Lucifer, is trying to regain some sense of control as things fall apart around him.

I’m not sure what it is, but something about the writing, and some of the things left unsaid, have me thinking that there are plenty of turns to be had as this title moves along. It might be that I’ve read some of Dan Abnett’s work before (Horus Rising, in the Warhammer series of books), and I’ve seen him twist religious overtones to build an interesting world with it’s own mythology. It might just be that I’ve spent too much time reading and watching sci fi… Who knows?

I do know that I like the style in the artwork. It’s not classically dynamic, or what you might expect in this type of comic… More in line with something more light-hearted, but it still works out pretty well here. It reminded me a little of Mike Mignola’s work with Hellboy, and that’s pretty fitting as the actual artist of the series, I. N. J. Culbard cites H. P. Lovecraft as one of his inspirations.

This book looks like the series could be a good ride to get on, for anyone looking for something outside of the normal superhero comic… Good writing, good art, an interestingly developing story. Call it an “A”, and I’m out.