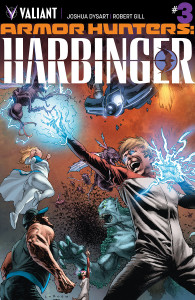 Mexico City just became ground zero for the Armor Hunters’ invasion of Earth, and the runaway army of super-powered soldiers called Generation Zero needs to bring in back-up. Better call…the Renegades?! But when powerhouse brawler Torque and lighter-than-air free spirit Zephyr join the ﬁght, things are about to go from bleak to brutal as the Earth’s ﬁrst extraterrestrial invasion force unleashes an engine of global destruction with one sole purpose – to terminate…with extreme prejudice.

Enter the kids of “Generation Zero”, the products of genetic manipulation, surgical procedures, and heartless experimentation. Their purpose was to act as a covert strike force to be dispatched around the globe, under the control of a high level private security contractor. Or they were, before they won their freedom.

Now, enter the “Armor Hunters”, a ruthless group of space traveling warriors in search of the X-O Manowar armor, and earth born man who wears it. Willing to go to any length to gain control of the armor, the Hunters have launched an attack that destroys Mexico City, establishes a labyrinth of underground tunnels, and a hive of devouring insect-like creatures. The purpose of the bugs is to eliminate the indigenous population (that would be us), and leave the world and all of its goods for their convenience. I guess picking through the remains of every living thing on earth to find a suit of armor seems like an easy out to some folk…

Generation Zero do their level best to save who they can while making their escape. The powers and abilities of these kids is as diverse and interesting array of possibilities as a jaded comic book reader like me could hope for. There’s also plenty of gross out moments to go around.

Robert Gill (artist) does a great job of bringing the aforementioned gory details to life, letting the reader take it all in whether it’s a close up shot or a sweeping long range panel. Gill’s partner here, writer Joshua Dysart, gives us a great group of people, as unique and individual as any group of supers in comics, to follow. We’ve got adults, kids, kids who look like adults, giant cartoon birds, and colossal kaiju.

Try to keep up. It’ll be worth it. Have I ever lied to you?