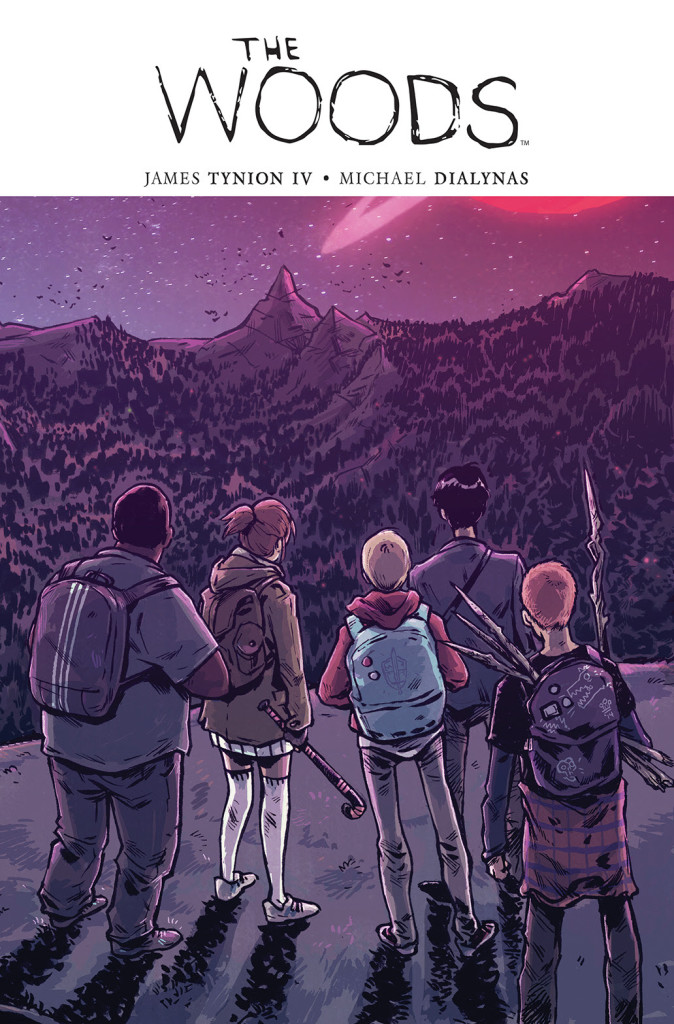 What would you do if your entire school suddenly appeared on an alien planet? Award-winning publisher BOOM! Studios is pleased to announce the September debut of THE WOODS VOL. 1 trade paperback, collecting the first four issues of James Tynion IV (Batman Eternal, Red Hood and the Outlaws) and artist Michael Dialynas’ (Amala’s Blade) thrilling and terrifying tale of one school’s struggle for survival and understanding on a new world. THE WOODS #1 was the highest original series launch from BOOM!’s original Studios imprint since IRREDEEMABLE #1 in 2009. To entice as many readers as possible who may have missed out on this series, BOOM! is offering the trade paperback at the introductory price point of $9.99. Retailers and fans will get a second chance to discover why THE WOODS is one of BOOM!’s most talked-about titles when the first collection hits stores on September 3rd, the same day as issue #5.

On October 16, 2013, 437 students, 52 teachers, and 24 additional staff from Bay Point Preparatory High School in suburban Milwaukee, WI vanished without a trace. Countless light years away, far outside the bounds of the charted universe, 513 people find themselves in the middle of an ancient, primordial wilderness. Where are they? Why are they there? The answers will prove stranger than anyone could possibly imagine. If you’re fan of teen conspiracy comics like Morning Glories, Sheltered, and Revival, you’ll immediately be sucked into THE WOODS.

“If you have $9.99 to take a shot on a new trade in September, THE WOODS VOL. 1 is a bullseye,” said BOOM! Studios Editor-in-Chief Matt Gagnon. “James and Michael have delivered one of the most refreshing and entertaining new series of the year. It’s strange, smart, and suspenseful, and we’re over the moon to be collecting the first arc into a volume that readers can easily jump into.”

Praise for THE WOODS:

“’The Woods’ #1 is a solid read that goes from humorous to horrific at breakneck pace.” –Comic Book Resources

“The way that Tynion’s script and Dialynas’ scene staging weaves us through the major characters in ‘The Woods’ is almost like watching a tracking shot in a great film.” –Multiversity

“Definitely pick this book up. Even if you’re not into indie comics, this is one fun book.” –Ghost Volta

“…this series is already proving to be one of the best of the year.” – Comic Bastards

“‘The Woods’ #1 is a good start at what one can only hope to be entertaining future character development, if they live long enough.” – Watch Play Read

“The debut issue delivers great characters, a compelling mystery and the promise of so much more to come with each, you can’t ask for much more than that.” – Positively Nerdy

“…a daunting adventure in a massive world full of action and danger that is extremely appealing and absolutely gripping.” – Geek Sushi

THE WOODS VOL. 1 TP features a cover by Michael Dialynas and will be available for purchase at the local comic shop nearest you on September 3rd. It carries an introductory retail price of $9.99 under Diamond order code JUL140953. Not sure where to find your nearest comic retailer? Use comicshoplocator.com or findacomicshop.com to find one! It’s also available for order directly from boom-studios.com.