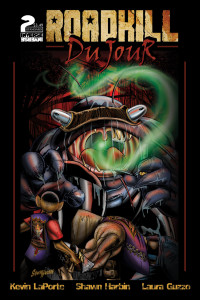 Roadkill du Jour is a tale of motorcycle gangs in a mystic bayou world, clashing in an explosion of vengeance and voodoo. At the heart of it all is the enigmatic loner, DuJour, by all counts a victim…of fate, of changes, and – most of all – of the black magic-wielding Mama Houdoo, dark mistress of the rival Gatorbait Motorcycle Club! Our story is that of duJour’s quest to rid himself of his curse(s) and gain some satisfaction at the expense of Mama and her ilk.

In this second chapter, duJour recruits avenging weapons in the forms of NEW misfit members of his Roadkill Motorcycle Club, all the while watched and warded by the witch, Mama Houdoo, and her legion of horrific minions!

Kevin LaPorte has come through again with this second issue to this series that defines what being an indie comic is. Roadkill Du Jour is a creative horror romp which is one part Cajun Sons of Anarchy, one part Troma-esque Ghost Rider and one part Greek myth.

Dujour’s quest is to save his true love who in the clutches of Mama Houdoo, a vengeful voodoo priestess, and he will fight through twisted demonic hordes to get her. Like any good anti-hero, Dujour has turned his curse into his strength. He was cursed to only eat road kill, but whatever he eats – he gains it’s powers (perhaps Mama was thinking the curse would make him like an easy to control roadkill zombie), so in this issue Dujour gets a hold of a dead vulture and become this kick-ass flying warrior ready to knock down the walls of Mama Houdoo’s fortress. Unfortunately for him, Mama has her own army in place including (but not limited to) Dujour’s old buddy who has been turned into a Catfish monster.

Yes… it’s a Vulture-man monster vs. a Catfish-man Monster and while it sounds sort of messed-up, the presentation is more than cool.

On paper this doesn’t sound like it would work at all, but due to LaPorte’s amazing writing and the art team’s good action-animated art, perfectly exaggerated colors, and action-busting-out-of-every-frame layout – it actually works perfectly!

Kevin LaPorte has successfully supported Roadkill du Jour issues #1 and 2 (not to mention quite a few other projects) – I cannot wait for what wonderfully twisted things are coming in issue #3.

Bottom Line: As far as story / suspense this series beats out many of the mainstream horror / zombie books on the market! 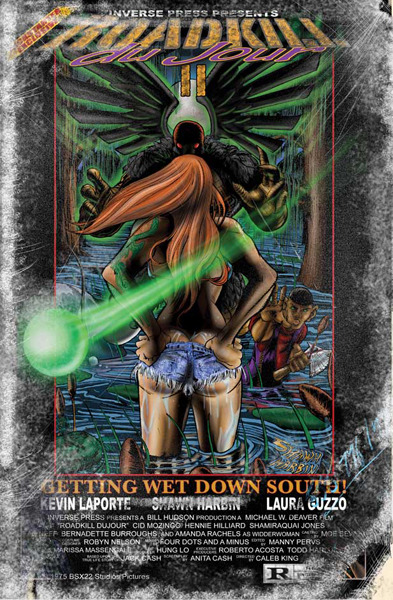