ARMOR HUNTERS #2 (of 4) (VALIANT FIRST)Written by ROBERT VENDITTIArt & Cover by DOUG BRAITHWAITEMask Cover by RIAN HUGHESVariant Cover by TREVOR HAIRSINEArtist Variant by BRYAN HITCHSURRENDER THE ARMOR OR EARTH WILL DIE!Following the shocking final moments of the previous issue, the Armor Hunters have made their intentions clear, and unless X-O Manowar is turned over to them immediately, thousands of innocents will become additional casualties of this already brutal war. Valiant’s most formidable heroes are about to go on the offensive, but the Armor Hunters have another trick up their sleeve, and this one will change the battle forever. Who will live? Who will die? The world will know what it feels like to be POWERLESS as Valiant’s massive summer crossover continues!$3.99 | 32 pages, full color | T+ | On sale JULY 9— 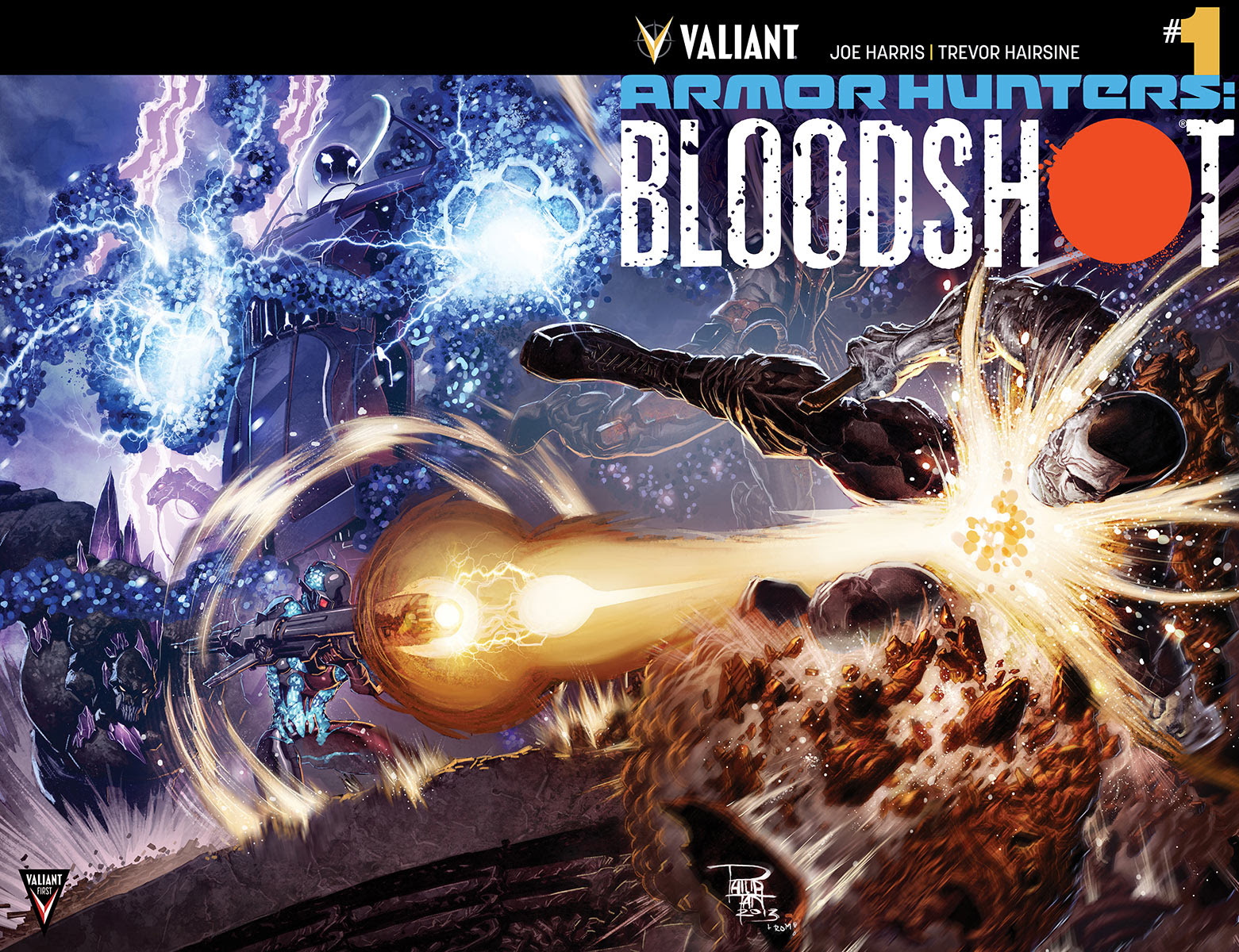 ARMOR HUNTERS: BLOODSHOT #1 (of 3) (VALIANT FIRST)Written by JOE HARRISArt by TREVOR HAIRSINEChromium & Standard Edition Cover by PHILIP TAN*Character Design Variant by CLAYTON CRAINArmor Hunters Variant by TREVOR HAIRSINEThe hunters become the hunted!With the major capitals of Earth under siege by the Armor Hunters, the world’s most dangerous weapon has decided to come in from the cold – and into the service of the top-secret Military Extraterrestrial Reconnaissance Outpost (M.E.R.O.)! But when one of the Armor Hunters’ own stages an extraterrestrial jailbreak inside of M.E.R.O.’s fortified command center, the nanite-enhanced commando known as Bloodshot will become the last thing standing between the galaxy’s most feared team of hunter-killers and a classified arsenal of secret weapons far too deadly for human hands!CHROMIUM EDITION: $5.99 | STANDARD EDITION: $3.99
32 pages, full color | T+ | On sale JULY 23*RETAILERS BE ADVISED: Due to the lead time needed to produce chromium, Armor Hunters Chromium Editions will be available in robust but limited quantities set prior to solicitation, and orders may be allocated.— 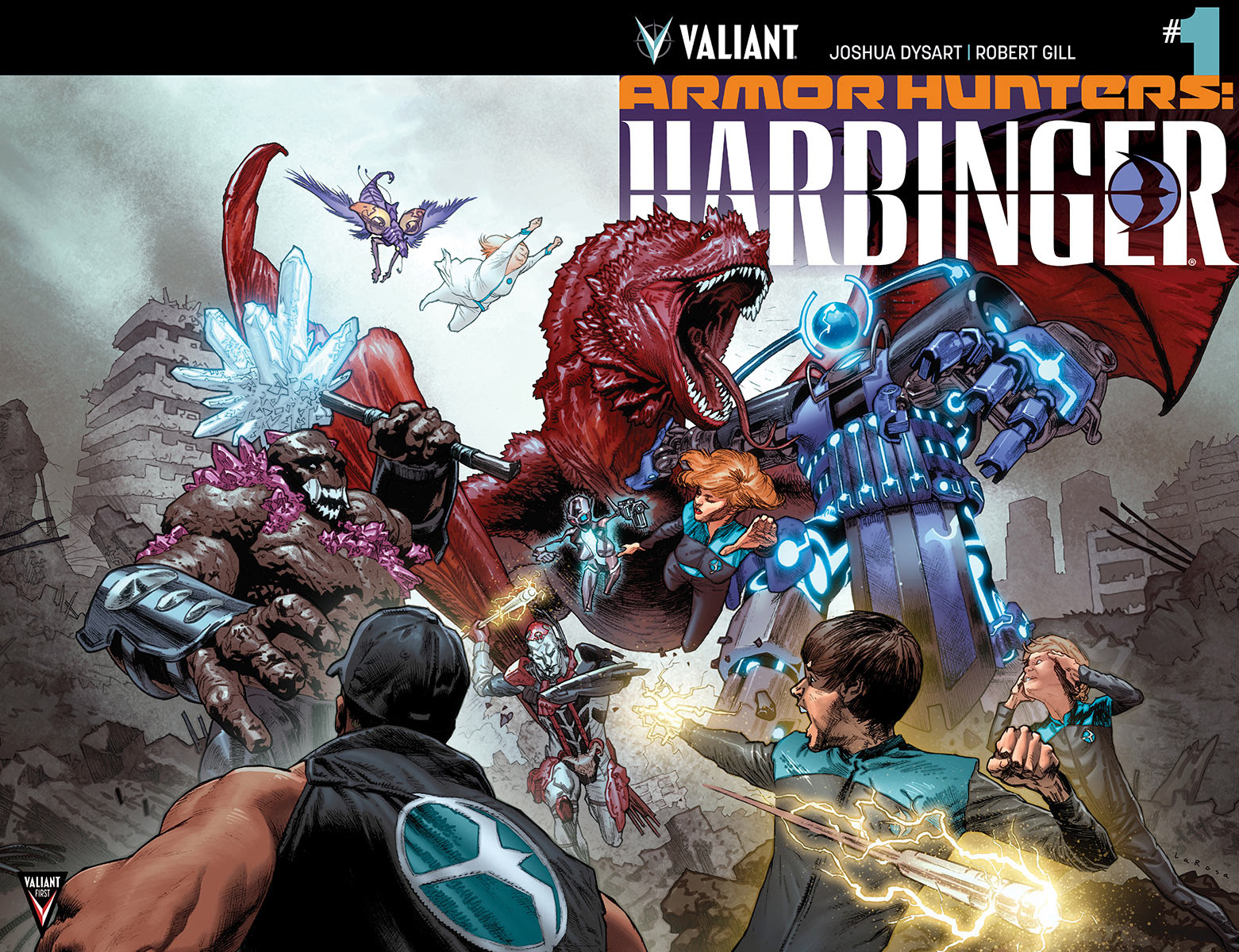 ARMOR HUNTERS: HARBINGER #1 (of 3) (VALIANT FIRST)Written by JOSHUA DYSARTArt by ROBERT GILLChromium & Standard Edition Cover by LEWIS LAROSA*Character Design Variant by CLAYTON CRAINArmor Hunters Variant by TREVOR HAIRSINEEarth is besieged by alien enforcers, and some of the most powerful people on the planet…are the kids!The Harbinger Renegades are still reeling from a tragic death in their ranks, but in the face of monumental destruction they’ll find unlikely allies in a fellow group of super-powerful teenagers. But is Generation Zero here to help…or are they just looking out for themselves?CHROMIUM EDITION: $5.99 | STANDARD EDITION: $3.9932 pages, full color | T+ | On sale JULY 30*RETAILERS BE ADVISED: Due to the lead time needed to produce chromium, Armor Hunters Chromium Editions will be available in robust but limited quantities set prior to solicitation, and orders may be allocated.—

UNITY #9 (ARMOR HUNTERS)Written by MATT KINDTArt bY STEPHEN SEGOVIACover by MICO SUAYANVariant Cover by STEPHEN SEGOVIATime to bring in…Bloodshot!The unrelenting forces of the Armor Hunters have wreaked havoc on planet Earth, leaving terror and destruction in their wake. Now, our last, best chance at standing against the calculating wrath of the Hunters comes in the form of Unity – Livewire, Ninjak, Eternal Warrior, and their latest recruit…BLOODSHOT?! But can they stop these galactic intruders before they capture X-O Manowar and destroy the Earth?$3.99 | 32 pages, full color | T+ | On sale JULY 16—

X-O MANOWAR #27 (ARMOR HUNTERS)Written by ROBERT VENDITTIArt by DIEGO BERNARDCover by MIGUEL SEPULVEDAVariant Cover by DIEGO BERNARDHunt it. Trap it. Kill it.The Armor Hunters are the most dangerous fighters in the universe – unparalleled in their abilities to catch and destroy their prey. Their mission has been long and unforgiving…and has featured the destruction of many X-O Manowar armors. For the first time, we see the brutal beginnings of the Hunters…and the devastation they have vowed to combat.$3.99 | 32 pages, full color | T+ | On sale JULY 30—

RAI #3 (VALIANT FIRST)Written by MATT KINDTArt by CLAYTON CRAINCover A by RAUL ALLENCover B by CLAYTON CRAINVariant Cover by CAFUNothing is what it seems…not even yourself…A seemingly random murder – the first in a thousand years – is unraveling the mysteries at the heart of Rai’s very existence. As the country of Japan completes another orbit around 41st century Earth, Rai, its sole protector, turns his investigation toward two figures he never questioned before: Father, the A.I. that controls Japan…and himself.$3.99 | 32 pages, full color | T+ | On sale JULY 9 —

HARBINGER #25 Written by JOSHUA DYSART with JUSTIN JORDAN and LUCY KNISLEYArt by KHARI EVANS with DAN GOLDMAN, BARRY KITSON, ANDREW PEPOY, RAFER ROBERTS, RILEY ROSSMO, RON WIMBERLY and MORE!Cover A by MICO SUAYANCover B by JENNY FRISONVariant Cover by LUCY KNISLEYThrowback Variant by SEAN CHENVariant Cover by BARRY KITSONToyo Harada’s last stand! The future of Harbinger starts here with a star-studded, 48-page anniversary milestone – packed with brand new contributions from an all-star cast of creators and shocking new revelations about the fate of Valiant’s teenage superteam!A Renegade has fallen and, now, there is no turning back. Stripped of his allies and all sense of self-preservation, the world’s most powerful “harbinger,” super-powered billionaire Toyo Harada, is about to inflict a terrible reckoning on a world he thought he could control…and everything we thought we knew will be forever changed in its wake.Original series creators Joshua Dysart and Khari Evans reunite to deliver a devastating climax to the second year of the series that The Onion/A.V. Club calls “the crown jewel of Valiant’s lineup” – and officiates the “Death of a Renegade” with all-new artwork and stories from an incredible roster of award-winning talents, including Dan Goldman (Red Light Properties), Justin Jordan (The Strange Talent of Luther Strode), Barry Kitson (Empire), Lucy Knisley (Relish: My Life in the Kitchen), Andrew Pepoy (Fables), Rafer Roberts (Carpool Buddies of Doom), Riley Rossmo (Drumhellar), Ron Wimberly (Prince of Cats), and more!$4.99 | 48 pages, full color | T+ | On sale JULY 16—

ARCHER & ARMSTRONG #22Written by FRED VAN LENTEArt by PERE PEREZCover A by SHAWN CRYSTALCover B by MICHAEL WALSHTHE END IS NEAR!Archer and Armstrong have survived their stay in the Hotel California, but now they are at the mercy of the Church of Retrology and the despicable Lizard King! What does this disgraced former rock star have in store for our dysfunctional duo, and what secret does he hold that has affected celebrities (both living and dead) for untold decades?$3.99 | 32 pages, full color | T+ | On sale JULY 23—

QUANTUM AND WOODY #12Written by JAMES ASMUSArt by WILFREDO TORRESCover by TOM FOWLERBeaten! Bloodied! Bamboozled!Quantum and Woody took the battle straight to the enemy – the mad-science cabal called Edison’s Radical Acquisitions and their mysterious, monstrous new leader – and the enemy kicked their ass! When these rogue biologists (and roboticists) get their hands (and robo-claws) on their new lab subjects, Quantum and Woody are as good as vivisected! (And, by vivisected, we mean dead.)$3.99 | 32 pages, full color | T+ | On sale JULY 2—

UNITY VOL. 2: TRAPPED BY WEBNET TPBWritten by MATT KINDT with ROBERT VENDITTIArt by CAFU with LEE GARBETTCover by CLAYTON CRAINFor every action, there is an equal and opposite reaction. First came UNITY… Now meet WEBNET!Coming off of the earth-shattering repercussions of their first mission, Ninjak is leading the newly formed Unity team right back into the trenches to face the Valiant Universe’s next colossal threat – the enigmatic Dr. Silk and his high-tech terror cell: WEBNET! With the fate of untold millions on the line, can this team of cutthroat heroes uncover Silk’s endgame – and his connection to Ninjak’s shadowy past?From New York Times best-selling writer Matt Kindt (Mind MGMT) and superstar artist CAFU (Action Comics), start reading here when X-O Manowar, Eternal Warrior, Livewire and the rest of Valiant’s best-selling superteam begin an all-new, high-stakes adventure! Collecting UNITY #5-7, plus the landmark first appearance of Ninjak from X-O MANOWAR #5!$14.99 | 112 pages, full color | T+ | On sale JULY 9
TRADE PAPERBACK | ISBN: 9781939346346