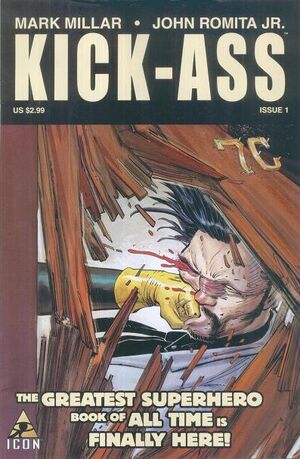 Hey there! Here is a very cool write up and script review of the upcoming Mark Millar film Kick Ass, based on the comic of the same name, from Moriarty over at AICN. This puppy looks to be on the bullet track to becoming a film. I haven’t read a single issue, but I think this is something worth keeping your eye on. I know my particular comic shop is sold out of every issue, but I might know a few people who can get there hands on what I’m looking for.

“It’s no secret that I’ve been fond of the work of Matthew Vaughn so far. I think LAYER CAKE is a bad-ass little crime film that perfected the formula Guy Ritchie and Vaughn created in LOCK, STOCK & TWO SMOKING BARRELS and SNATCH. STARDUST is a lovely, wacko fantasy that did a nice job of capturing Neil Gaiman’s voice on film, something that has been long overdue.

And right now in London, as that photo of Nic Cage confirms, Vaughn has started production on the film that will absolutely confirm his status as a cult god, and which may well break him through to mainstream success in a very real and quantifiable way. If WANTED, a nihilistic gun-freak wet dream that was little more than a cobbled-together ripoff of THE MATRIX and FIGHT CLUB, could do the business it did this summer, then KICK-ASS has a chance at being something even bigger.

The movie is already generating fan sites, and the comic has created a genuine buzz even among people who don’t normally read comics. A friend of mine ranted and raved to me recently about how great the comic is so far, and when I started asking him questions about it, he went pale. I guess the script covers more ground than the comic has so far, and I inadvertently spoiled some things for him. As Jane Goldman and Vaughn wrote the script adaptation, they had direct access to Millar, who told them where he was headed with the story, even as he reacted to some of their impulses, building them into the comic and refiguring some of what he had in mind. As I said, though, I haven’t read the comic. I’m more of a trade paperback guy than a month-to-month guy with comics these days… just the way I prefer to read them, like a guy who only watches TV shows as box sets on DVD. So when I talk about the storyline or the characters below, realize I’m referring to the script, which may not match the book exactly.

I’m excited. I think this is exactly the sort of new take on the genre that audiences are going to enjoy because, finally, they’ve reached that tipping point. They’ve seen enough traditional takes on superhero fare over the last decade, and I think the pump is primed. They’re ready for the conventions of the genre to be twisted, inverted, destroyed outright.

That’s the start of the script. We see this kid suiting up. Same voice-over narration. And then… there’s a painful reveal that we’re not watching what we think we are, and we’re off and running with Dave Lezewski. He’s a normal kid. As he describes himself, acutely normal. And he’s just trying to make it through high school with some dignity intact. It’s written with a frankness that would give Sony a heart attack if this were SPIDER-MAN. Dave and his friends Todd and Marty are very real, very profane. Normal. Average. There’s a girl. Of course. Katie Deauxma. And he isn’t even on her radar. And he’s got superheroes on the brain. He knows he isn’t one, but that doesn’t stop him from ordering a wet suit and a ski mask and dressing up in front of a mirror. Fantasizing about being a hero. Wanting it.

And then about fifteen pages in, Mindy Macready and her father Damon are introduced. And from the moment they arrive, the film is obviously not playing by any rules that any studio would allow. Mindy’s 11 years old. And her daddy is training her. Making her dangerous. For a purpose. Their introductory scene is really scary and crazy, and it will shake an audience when they see it. They’ll be awake after that if they weren’t already. Their relationship in general is like THE PROFESSIONAL PART II, if Gary Oldman’s character hadn’t come back. If Leon and Matilda had kept going. Getting better at what they do. And when you see their origin story, told in the form of a homemade hand-drawn comic, it’s wrenching. It’s a twist on the traditional way heroes are created in comics, but awful and sad in a way no major publisher would dare.

And then Dave decides to do it himself.

Just start doing it. Going out at night. Learning how to run and jump and get from rooftop to rooftop. He’s a kid. He’s got no powers at all. But he’s determined. And more than anything, he loses himself in the fun of it. The kick of doing something he dreams about. The reality of it is a chemical thrill for this kid.

And it’s fun for about three pages. Until Dave ends up in the hospital. Seriously fucked up. Hit by a car and stabbed in the stomach fucked up.

And he ends up filled with metal. Pins and plates and a rod. His head. His arm. His leg. You’d think that would stop him, but Dave is wired to do this and nothing else. He’s got no choice. So he goes out again, and this time, when he gets in a fight, he’s able to give some punishment back. And this fight gets recorded and shows up on YouTube and then Dave opens a MySpace page so people can find him, and he starts to catch on. People start to really root for this guy. And reach out to him. And believe in him.

Even Mindy, watching his viral videos, hearing about him, can’t help but admire his actions. She may be a deadly little robot, but she reacts to Kick-Ass’s raw bullheaded courage. Her father may not be a fan, but she is.

And the way their paths eventually cross, the point my friend tells me is the end of issue #3, comes around the halfway mark in the script. And it’s a stunner…

… more proof that no studio in town would know how to actually make this film while leaving it intact.

Vaughn knows. And Vaughn’s smart, working outside the system and owning a piece of the film. If you can raise the bank to do something like this, something radical, and you can own a piece of it in the meantime… that’s real filmmaking power. I think being a producer first has made Vaughn very good at getting a project off the ground. Once it’s airborne, he’s able to focus on actually making the movie, and I’m dying to see how he interprets this sort of comic book “real” that John Romita Jr.’s using for the book.

Mark Millar seems to be intimately involved in the production at the moment, and that’s interesting. It seems like a really close collaboration with someone whose work you’re adapting on the part of Vaughn and Goldman. I like the boy-girl stuff in the movie, the way Dave gets close to Katie when she misinterprets something and starts to think of him as her “gay friend.” It’s funny, but it’s not played as a THREE’S COMPANY-style joke. It’s more about the agony of finally being close to the person you want, but unable to close the distance of that last few inches.

Another thing I really like in the script is the way the main bad guy, a drug lord named Frank, has a son the same age as Dave. Chris is a quiet kid who keeps to himself, and he wants nothing more than to be a part of his father’s business. When his father becomes obsessed with finding Kickass and killing him, Chris finally sees a way to make his father notice him. He volunteers to hunt Kickass down himself, and to do so, he takes on the character of another vigilante named The Red Mist. This is the role that Chris Mintz-Passe is playing, and it seems to me that this is make or break for him. If it works, he’ll be able to shake McLovin’, and if it doesn’t, then he’s McLovin’ for life. I think it’s a hell of a role as written.

They all are, though. That’s the thing. The reason this really works isn’t because it’s a clever deconstruction of a genre. It’s because of the intensity of feeling that each of these characters has been brought to life with, the heightened emotion of the piece. It works because you feel the impact of every choice, every scene. And the kids in the film talk like real kids. It’s savvy writing precisely because it’s not more clever than reality in every single scene. People make bad choices. There are awkward moments that strike me as very close to how things would really play out. It’s just grounded, solid character writing at every turn.

Nic Cage has been circling various superhero properties for years now, famously almost playing Superman at one point. He’s such a comic fan he even named his kid Kal-El. For him to play Big Daddy seems karmically correct to me. Big Daddy was born of tragedy, but he took his identity from comics, just like Dave does. In fact, you could even view KICK-ASS as a wry commentary on comic fans in general. There’s something really rich bubbling just under the surface of this one, even as outrageous set pieces and broad dramatic flourishes play out. The climax of the script is genuinely tense, and the violence throughout is so grim that there’s little chance you’ll mistake this for just another comic book movie. The stakes are high here, and if Kick-Ass or Big Daddy or any of the others are going to live to that last page, they’re going to have to stop living in a fantasy and deal with some harsh, harsh realities.

And as a big fan of SHAOLIN SOCCER’s lyrical ending images, I was moved deeply by the way Vaughn wraps it all up. He may paint a dark picture of human nature here, but he has faith that we are capable of more, of genuine good, and that’s a hell of a way to leave an audience.

I’m hoping to head over to either London or Toronto while they’re shooting this one so I can bring you some impressions from the set. I have a feeling when it finally hits next year, it will be seen as a fascinating bookend to WATCHMEN. If superhero movies finally grew up this year with THE DARK KNIGHT, then next year it looks like they’re going to go completely insane.