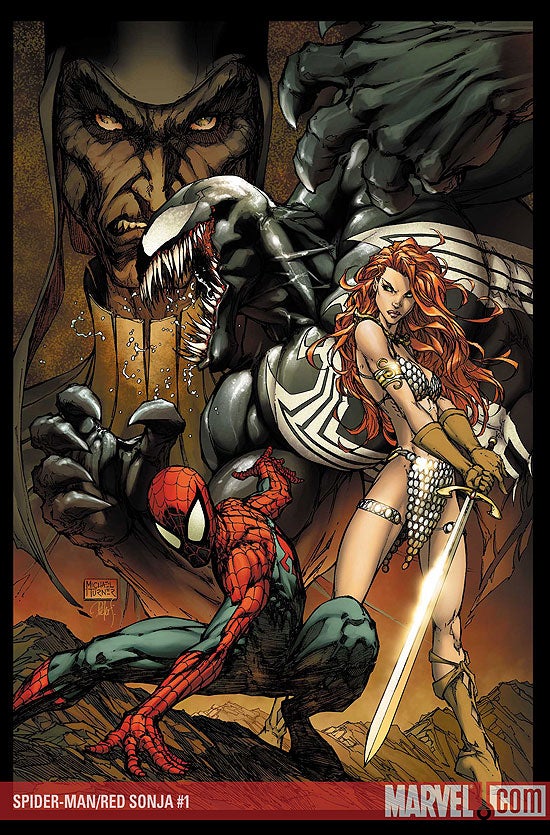 Marvel is pleased to announce that Spider-Man/Red Sonja #1 (of 5) has sold out at Diamond (though copies may be available at the retail level). This five-issue crossover event between Marvel Comics and Dynamite Entertainment marks the historic reunion of Spider-Man and Red Sonja – following up from the classic Marvel Team-Up #79, with the creative team of writer Michael Avon Oeming (Omega Flight), penciler Mel Rubi (Red Sonja) and superstar cover artist Michael Turner with Peter Steigerwald. Now that the two heroes have encountered each other once more, can they find a way to co-exist or will their misunderstanding prevent them from combating the much larger threat of the sinister sorcerer Kulan Gath, and his newest “ally” the original Venom (Eddie Brock!)?

“Reader and retailer reaction to our Swords & Spider-Sense epic has been very rewarding,” said editor Bill Rosemann. “The entire creative team is giving their all to deliver an exciting story worthy of the epics that have come before – so thanks to all who have come along for the ride. But look out! Who’s also jumped onboard? It’s the classic Eddie Brock version of Venom! Hold on to your brains!”

With Venom entering the fray, and Spider-Man fending for his life against the She-Devil with a Sword, can the forces of good hope to win? One thing’s for sure—the only way to find out is to check out Spider-Man/Red Sonja #2, in stores this September!

Please note that Marvel has no plans to go back to press on Spider-Man/Red Sonja #1 at this time. SPIDER-MAN/RED SONJA #2 (of 5) (JUL072141)
Written by MICHAEL AVON OEMING
Penciled by MEL RUBI Cover by MICHAEL TURNER
Rated T+ …$2.99 RED SONJA TM & © 2007 RED SONJA LLC. DYNAMITE ENTERTAINMENT TM & © 2007 DFI. www.dynamiteentertainment.com FOC—8/30/07, On-Sale—9/19/07
SB Side note: due to being in Chicago, I was unable to get out mainstream reviews this past week, watch for my take on the book coming up