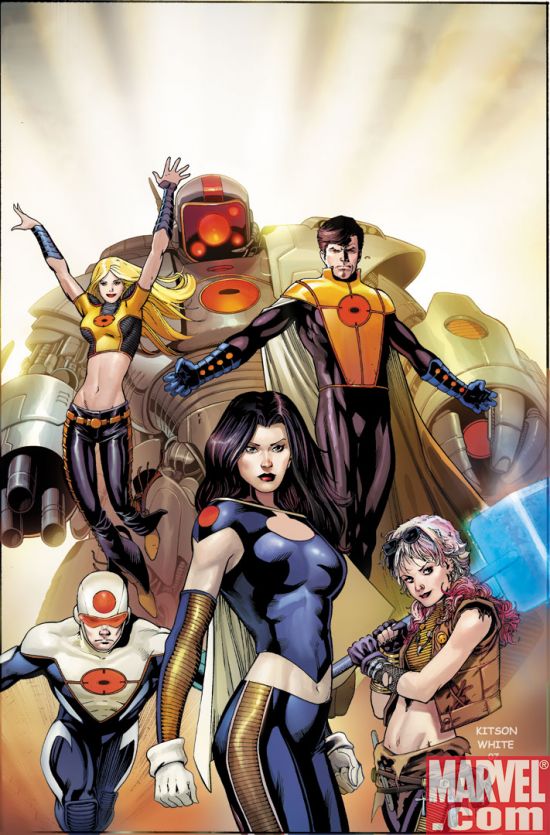 The Order #1 (Marvel – Fraction / Kitson / Morales / White)– As we have been seeing recently, Marvel has been trying new talent and new ideas… some of them are just a dig into your wallet (as Jotham reviewed in some of the supposed World War Hulk crossovers), but some of the new Marvel stuff are really gems… the Initiative, The New Warriors, Omega Flight and a lot of hope for the new Thor book. The Order I would put in this second category. The Order is a completely fresh look at the superhero team… all the positives and negatives that come with a government-run, corporately-backed, market-minded 21st century superteam. A great book to jump in on… new characters, mostly new talent… The Order is definitely a sign that Marvel is picking up their game Amazons Attack #4 (DC – Pfeifer / Woods)– Finally this book is getting somewhere! We are seeing action / drama and even a tad of comedy from this well written story by Will Pfeifer. Amazons Attack boils down to a political thriller with a whole bunch of kick butt action… tied closely with Countdown I can finally tell you that AA is a must read for those who are trying to make heads or tails out of what is happening in the DC Universe. I am not a Wonder Woman historian so I am unsure whether the now revealed villains behind the attack fit within the WW continuity or not. Given some of the impact the story is having on the President of the US and some obviously missing or just minor parts from DC major players, this still seemly slightly Elseworld or at least taking place on one of the other 51 worlds. Even without a huge WW background, still an enjoyable book

Series Grade B- (and rising) Battlestar Galactica #12 (Dynamite – Pak / Raynor)– This issue concludes this storyline (or season if it wasn’t a comicbook). Greg Pak finished strong with his Returners storyline. I have to be honest, as we moved through these twelve issues I definitely had my worries and doubt about where Greg was going with this and how he would resolve it and keep it in canon with the Sci-fi show. Mr. Pak came through with high marks. And Jonathan Lau has consitantly been on target with his art, so often when you have a comic based on some other property, you spend some time going… “is that supposed to be that character?”, not true with Mr. Lau’s work… Rock solid! Given our wait until 2008, any fan of the show will enjoy this series, if you haven’t already picked it up, make sure to get the trades or to dig through the back issue bins. Dynamite is also coming out with a BG: Season Zero to give us some pre-season one background.